Sitting in the pub in front of the Joanna, lank, stringy hair, crazy eyes and devilish smile: Jimmy Fagg was on old fashioned pub comedian with a sharp and biting wit. Those in the know would buy him a drink on entering the pub to spare themselves being savaged by his jokes.

He was a regular fixture in many East End pubs in the 60s to the early 80s. He was often billed as Mad Jimmy Fagg. He had a weekend residency at the Imperial Crown in Bromley-by-Bow and was well known in pubs such as the Red Lion on Exmouth Market. Both these pubs, like Jimmy, are now sadly long gone.
Though not a poet he was a brilliant in your face comedian. Many of his songs came from music hall. There was a great mix of popular songs, jokes and ‘recitations’ in music hall and both punk and ranting kept a fair bit of the tradition of earthy, working class humour. 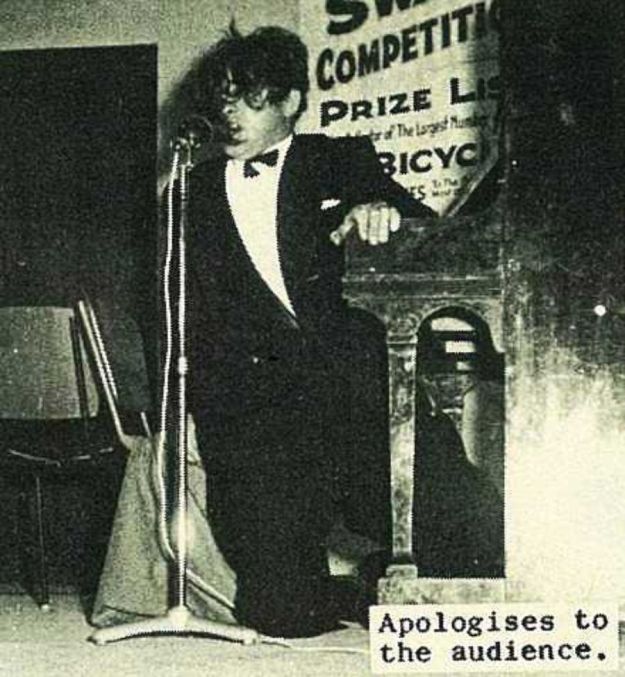 I Want To Go To Heaven For The Weekend was another song he’d belt out, songs that’d get the pub singing along drunkenly.
Ranters were often from the same working class culture and had the same in your face edge. The pub in the 70s and 80s was the focus of the community, this was before the TV and interweb isolated us. Handling rowdy crowds was part and parcel of your job. I’ve often advised young poets to get out and gig in pubs and with bands. Personally speaking, having come up through the ranks doing poems in pubs and gigs with the likes of the Angelic Upstarts, poetry audiences hold no fear for me at all.

Jimmy Fagg learnt his craft as a musician in the Royal Marines. It was said he’d twice been up for mutiny. As unruly as ever.
In the 80s he was spotted by the young wave of comedians who made up The Comic Strip Presents and appeared in many of their TV comedies: The Bullshitters: South Atlantic Raiders: Part 2 Argie Bargie!, GLC: The Carnage Continues, Oxford, Spaghetti Hoops, Les Dogs, The Crying Game, Detectives on the Edge of a Nervous Breakdown, Space Virgins from Planet Sex, Queen of the Wild Frontier. Although an older face than the likes of Rik Mayall, Ade Edmondson and Peter Richardson he was often the most anarchic.

He also appeared in films, Eat The Rich being the one I remember best. Better yet he played a pub pianist in the early Channel 4 Isle of Dogs drama Prospects. He plays through a fight started by a character played by mate Perry Benson. Jimmy also appears in Minder, both made by the much missed Euston Films.