Bradford in the 80s was a hotspot for ranting and punk gigs. Nick Toczek did sterling work putting on some great shows.
These flyers, from around 1987, are for some of the gigs he promoted.
Nick did the bookings, and ran the whole thing jointly with the late legend, Willi Beckett, who – amongst other things, was a fine poet and lyricist, fronted The Psycho Surgeons and was shadow Minister of Mental Health in the Monster Raving Loony Party.
Of particular interest is the one that lists info about the acts billed.
There’s an early Julian Clary cabaret gig here, he then gigged as the Joan Collins fan Club. Bloody good he was too.
Also worthy of note are a Seething Wells musical project Hobnailed Terrier Frenzy, I think that was with the Redskins’ bassists’ brother Mike.
Big thanks to Ginger John for these. 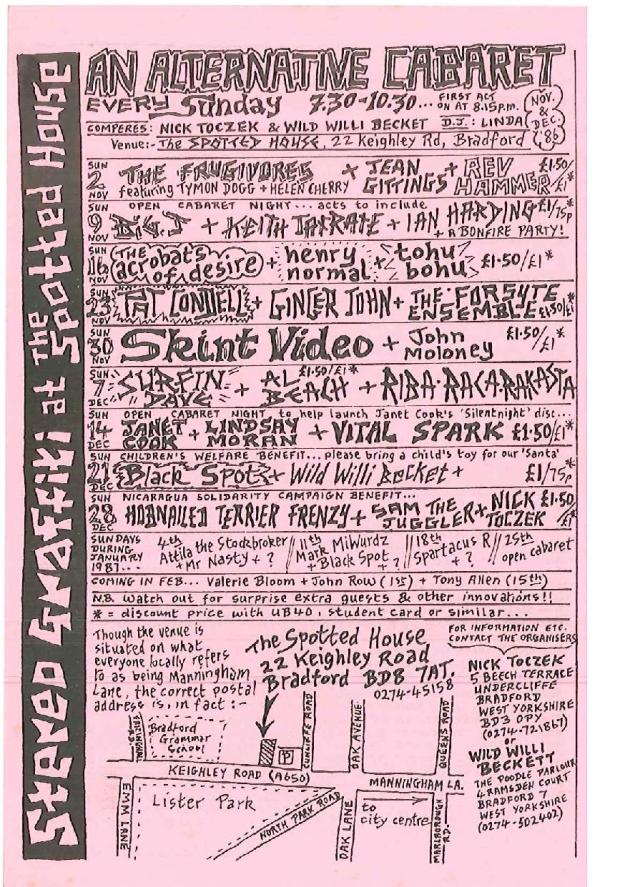 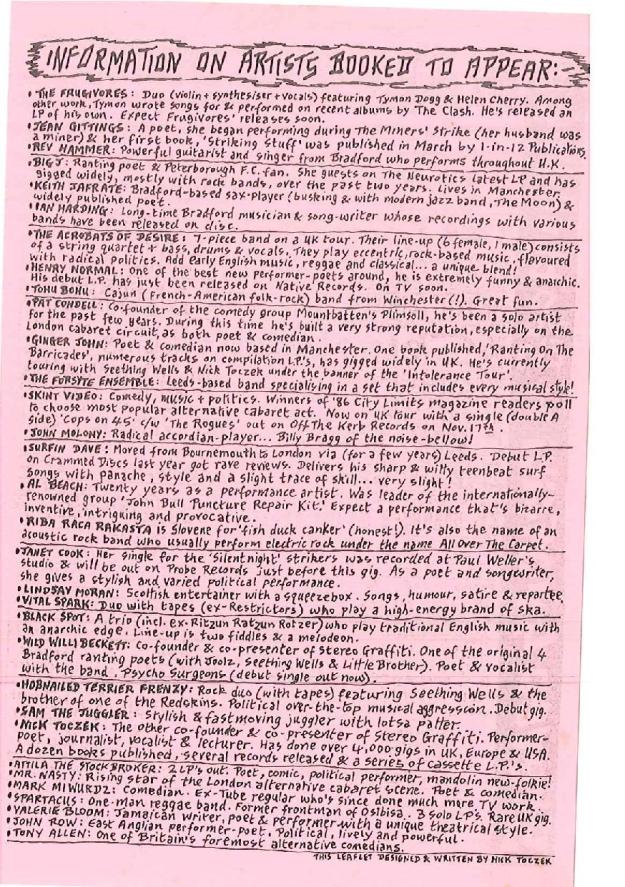 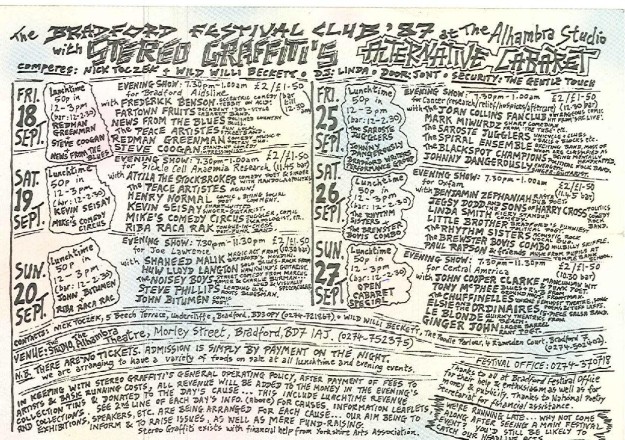 Garry Johnson against party politics, The Comrade a red, Skrewdriver ‘… not a political band…’ and the Redskins most definitely are. 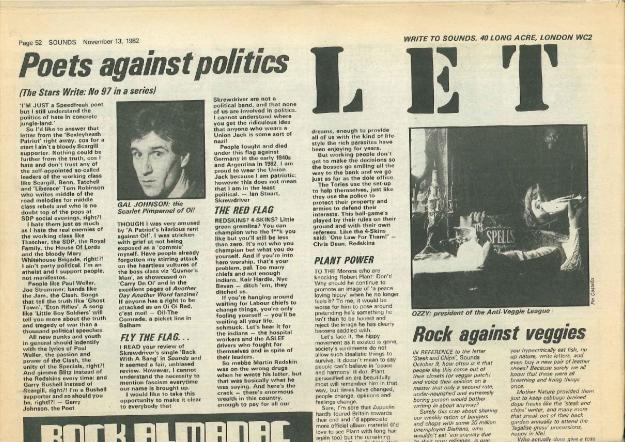 See the chart from issue 1 here

Big thanks to Russell Thompson who turned up this gem.
He writes – A Marxist friend of mine (possibly the only Marxist in Braintree) was recently having a clear-out and asked if there was anything I wanted. Amongst the copies of Quite Right Mr Trotsky and Starry Plough monthly, I happened upon two issues of a 1970s magazine called Voices: Working Class Poetry and Prose with a Socialist Appeal. One was from ’75, the other ’78.

They’re A5 fanzine-style things, consisting on the whole of competently-penned but unsurprising material. The earlier one, housed in a sub-Gerald-Scarfe cover, throws up titles such as ‘Prophecy of Revolution’, ‘Tribute to a Union Man’ and the oddly prescient ‘Epitaph for Maggie’ (not about her, as it happens). And, gosh – there’s a poem apiece by Les Barker and Keith Armstrong. And – what’s this? – J Cooper Clarke?!?

What we have here, two years before the start of the Hannett era, is a rather splendid piece entitled ‘No, We Don’t Like to be Beside the Seaside’. It’s a bit more free-verse than his greatest hits (that’s concessions to public taste for you), but otherwise most of the hallmarks seem to be in place: 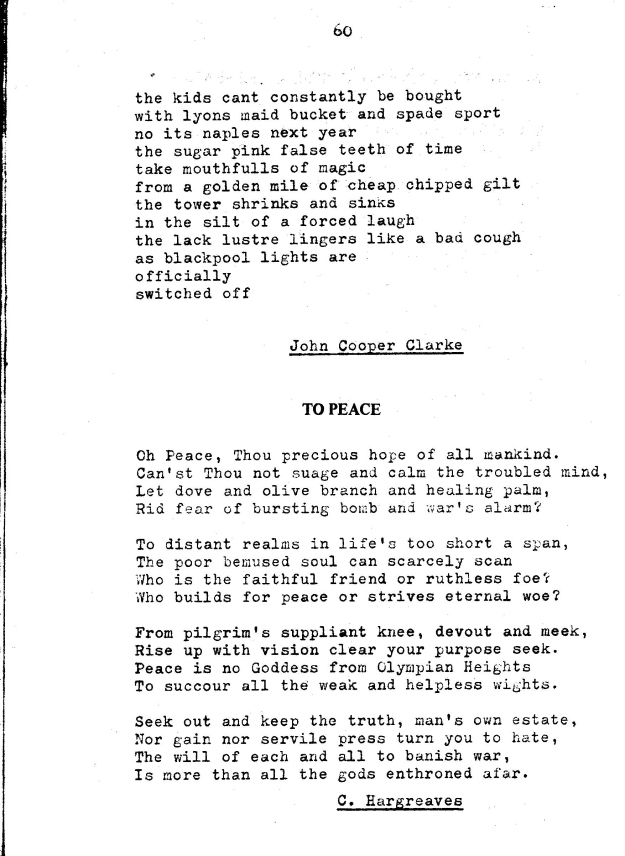 Classic stuff. And the moral of this story is: You never know what might be in a Marxist’s shed. 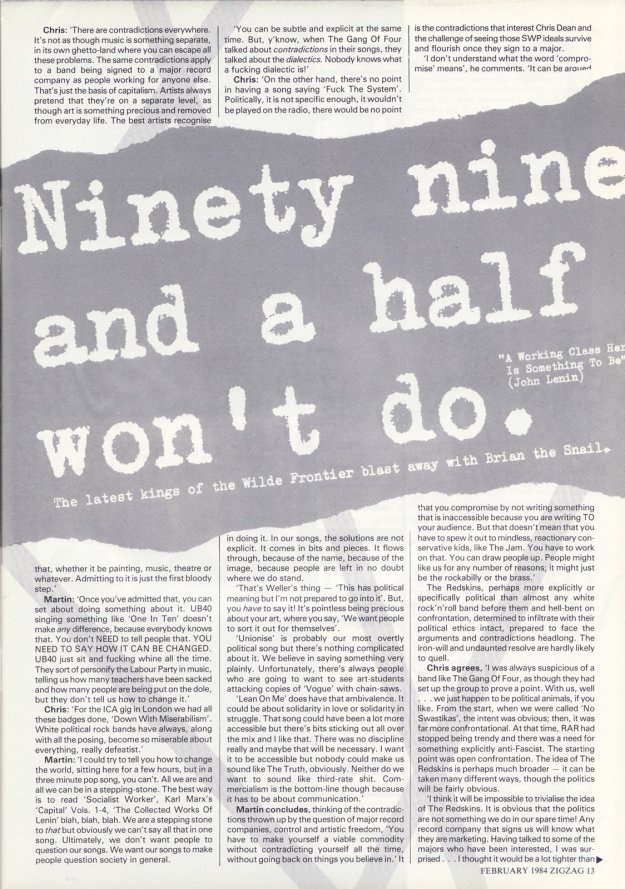 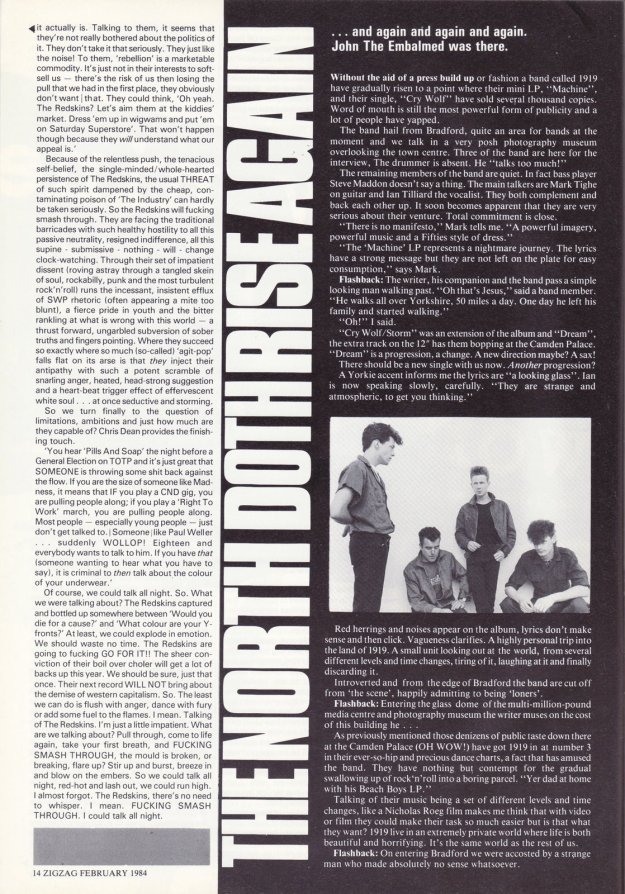 From Sounds, 1985.
The review is by journo Paul Wellings under a pseudonym.
You can read a ‘zine review here.

The NME from 25 August, 1979 writing about the inaugral Rock Against Communism gig.

and Sounds on the racist music scene in Leeds. This was prior to the Conway Hall gig, which had Leeds bands on stage. 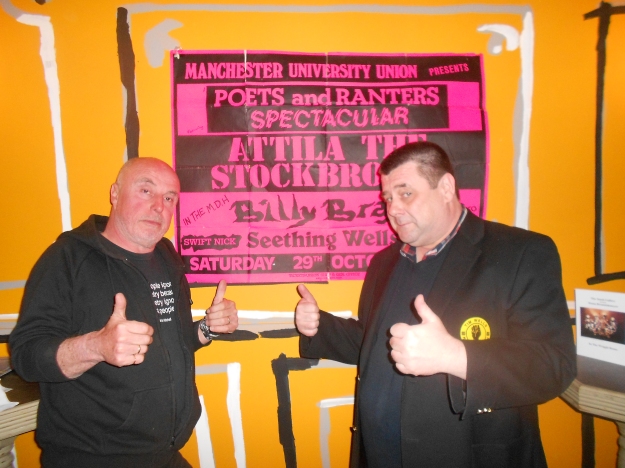 Attila the Stockbroker and Teething Wells

Laurie Bolger kicked off proceedings with a rendition of Garry Johnson’s ‘United’. There were a few 80s specific references through the night; Oi, the SDP, and Fare’s Fair but the young people seemed to get the jist of it all. 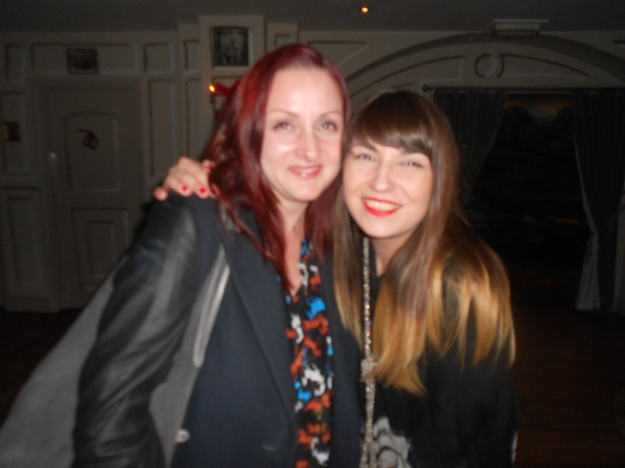 Stand Up and Spit producer Sarah and Laurie Bolger

The Bro’s Grim was next up with his own in yer face verse and Garry Johnson’s ‘Young Conservatives’ and The Comrade’s ‘Guvnor’s Man’.
The swearing and anger was piling steadily now.

Janine Booth ran through some of her original rants she did as the Big J back in the 80s as well as some new poems. As ever Janine’s message was direct, strong and funny and the audience really took to her.

Joshua Idehen followed with a quality poem of his own about the 2011 riots, finely fitting the mood of the night. He followed that with a Michael Smith’s ‘Mi Cyaan Believe It’. For me, a real high spot of the evening. 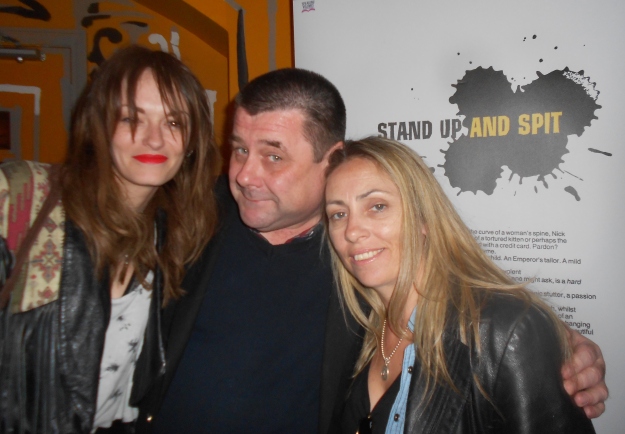 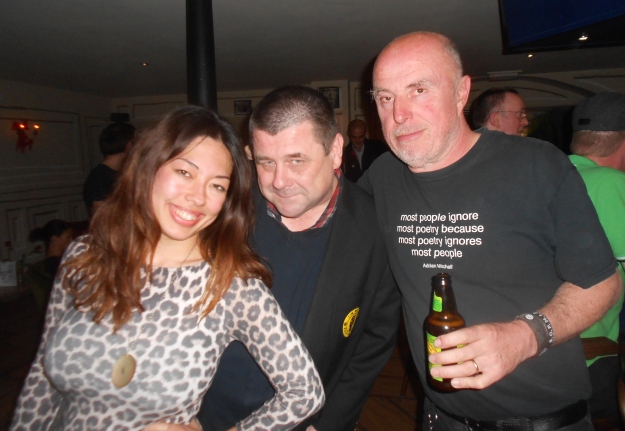 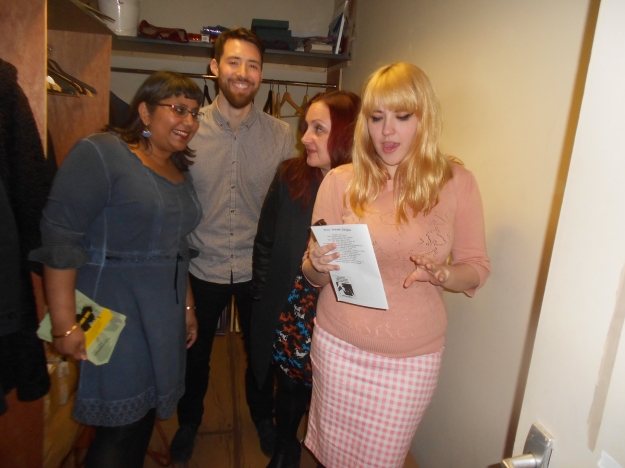 After a break for beers or espresso martini, whichever way your fancy goes, we were back with Laurie Bolger lambasting Shoreditch twat pubs. Ever popular that number.
Teething Wells did a Seething Wells poem and one of his own oldies, before a few new poems. Gentrification particularly took a kicking.

Emily Harrison took the mic’ next. She’s fast become a poetic powerhouse. She started with Ann Ziety’s ‘In His Image Created He Him’ and it went down a storm. Emily’s poetry is open and funny and there’s a strength in it’s honesty. he deals with class, feminism and mental health, amongst others, without apologies, without feeling the need to apologise.

Finally Attila the Stockbroker gave us a few old rants from the likes of Little Brother, Dino the Frog and Seething Wells as well as giving us a run down on ranting poetry back in the 80s. It was good to see him such fine flow.
It’s always a joy to hear ‘Away Day’ and to see a poet who’s kept poetry with the real people throughout his career.
Only one girl was knocked over by the sheer force of his ranting verse. Or it may have been the martinis she was putting away. Good times.

The Bro’s Grim and Stand Up and Spit producer Sharmilla

The gig was raucous, reflective and relevant. Great to see some of the original ranters still serving it up and some of the young writers of today kicking the right arses.

When the young W H Auden said “Tomorrow for the young, the poets exploding like bombs” he can hardly have had in mind the present officially approved roster of simperers – Larkin et al – whose idea of revolt would be not returning their library book.
Perhsps the likes of Dylan, Strummer and Kwesi-Johnson might have fitted Auden’s bill better.
Rock and poetry don’t flirt like they used to. The fabber daze of the ‘underground’ movement when the muse fornicated freely with jazz, folk, blues and more, apparently came to little. Spike Hawkins got as lost as his fire brigade. Pete Brown turned inscrutable muso, Roger McGough joined the Sunday supplements, Adrian Henri got a name check on a Jam album, Brian Patten stayed stuck on his whimsical treadmill and Betjeman trounced them all on disc.
I suspect their present day equivalents just form bands and bypass the literary stage altogether.
Tom Pickard seems a lonely survivor from those times; maybe that’s why this is called Hero Dust – managing to make a living as a poet is no small feat. Pickard’s battle has always been survival, integrity, honesty. His poems celebrate those qualities in others just as they chart his personal struggle to maintain them in himself.
Pickard is a gritty son of the North East, the literary equivalent of Eric Burdon and Mensi’s respective sensibilities fused together. He writes from deep inside Albion’s suppressed soul, poems about dole offices, police calls, bookies, football terraces, boozers, sex and drugs (but only very rarely rock and roll).
Petty officialdom is a favourite target; the officious civil servant, the corrupt council, the smug mayor:
That gold chain was scraped
from the lungs of pitmen…
Your gown is a union leader
gutted and reversed
Pickard’s approach to ‘the street’ – a rock cliché, but rarely charted in contemporary British poetry – is as unconditionally anti-romantic as Cooper-Clarke’s in ‘Beasley Street’:
Hero guttersnipe
Cream of the scum
With a head like that
You should be hung.
The more personal lyrical pieces spell out Pickard’s ‘order of chance’ in less obvious ways, with ‘Dancing Under Fire’ and the title poem picking their way through the chaos of material fact-Rusted wheels/cast iron cogs.
Hero Dust is a selection of earlier books together with newer poems though there’s nothing from Pickard’s autobiographical prose gem Guttersnipe!. Contrary to academic opinion, real poets are never wimps. 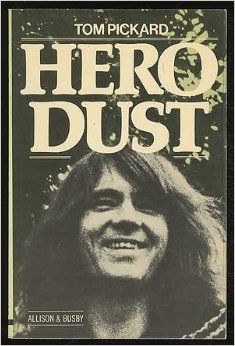