‘ANOTHER BOOK ON SKINHEADS hits the streets with all the impact of a punctured dunkie hurled at a sleeping rhino by a crippled pensioner. Don’t all yawn at once at the arrival of skinhead by Nick Knight, a self-styled ‘complete skin history’.
Knight, you may recall, was the creep who flogged the News of the World-shock horror pictures last year and there’s plenty of evidence of his sensationalist skills here (snapping pre-teen kids sieg heiling demonstrates the sort unflinching dedication to duty that’s bound to secure him future employment on scummy Fleet street). But its not him that bothers me, or the fashion notes, or Harry Hawkes fine discography of reggae of the ’69 kind. No, what gets up my nose is an unpleasant slug called Dick Hebdige who purports to offer a sociological guide to skinheads. Needless to say it’s superficially impressive garbage involving a distortion of history of Stalin/Goebbels proportions.
For starters, how could any consideration of skins dismiss Sham 69 and 2 Tone in a matter of lines? Answer: only if it wanted to write all skinheads off as thick idiots! And of course, because Dickhead doesn’t want to waste time before getting stuck into oi! and Sounds. How much Dickhead hates Sounds. How little does he know about ANYTHING!
According to this dork, oi! was ‘invented’, presumably the same way Columbus ‘invented’ America. Just as Columbus discovered what the Indians already knew about, so the kids and bands were already there! Do these cretins really believe the Sham armies, the UK Subs fans and the legions of hardcore punks and skins disappeared overnight because the NME declared punk dead? The various strands of new punk were there for anyone to see and we covered them alone (like we covered early Ruts/SLF/Skids etc alone) because we were there too! What was the Upstarts/Subs/Rejects/Ruts/Splodge on Top of the Pops? Scotch mist?
Dickhead claims Sounds tried to do for oi! what NME did for punk. What did the NME do for punk? Caroline Coon in Melody Maker and John Ingram in Sounds covered punk first; Parsons and Burchill who covered it best came slightly later(and fighting the NME establishment all the way), but they were matched column inch for column inch by Savage and Suck in Sounds. I used to buy them all because they all covered punk. NME’s support for RAR is documented, Sounds historic Anti Nazi League issue isn’t mentioned. Sounds covered oi! to boost our circulation, he claims, thus demonstrating as much knowledge of market research as a Durex salesman in a nunnery. Presumably we should have covered Stockhausen to lose sales. He makes great play of my disgust at ‘machiavellian middle class communists’, failing to mention that this was written more than a year after he claims it was. But I stand by it now. People like Militant are thoroughly machiavellian. Socialism used to (and should still) stand for working people and HONESTY – no wonder today’s feeble petite-bourgeois ‘commies’ fail to relate to working class kids. I attacked RAR because RAR failed, it threw away its working class base and became a middle class toy. In contrast, 2 Tone showed how anti racism really works, but 2 Tone isn’t mentioned because it would destroy Dickheads case. Especially when you also recall which paper gave the most coverage to this sensational street movement. Modesty prevents.
But modesty doesn’t prevent me making one thing clear – I compiled the oi! albums to give good punk bands a hearing. The compilations were a showcase/platform for working class bands FULL STOP. Oi! was always for skins, punks and herberts – it was united by class not fashion.
And contrary to Dickheads hideously distorted history, the trouble that marred early oi! in London wasn’t political but rival football gangs! Undeterred by facts, he goes on to assert that Southall was our Frankenstein’s monster. A kid got stabbed at a Black Uhuru gig a day later, yet somehow that wasn’t another one of our monsters, even though we cover more reggae than any other rock paper. But while other music is judged by tunes and lyrical content, oi! is judged by its unwanted minority element of fans. Even Dickhead is forced to admit that most skins, like most working class kids, are apolitical. This doesn’t deter him from emphasising right wing elements and making no mention at all of oi!’s well established socialist/radical tradition.
Instead he seeks out a near illiterate skinhead called Harry. Even Harry’s name, we are told demonstrates how skinheadism is backwards-looking. In my opinion, Mr Hebdiges first name tells us more. But no matter, we get Harry as ‘typical skin’ because Dickhead wants to present skins as the inarticulate folk demons of(his) middle class consciousness. In contrast,most oi! performers are incredibly articulate: Hoxton Tom, Lee Wilson, Garry Johnson, Mensi, Micky Geggus, Mick Fitz, Oi – the Comrade we’re talking sharp minds here.
Elsewhere in this book we’re told that little has been heard of oi! since last year. The charts beg to differ, with our indie charts saturated with oi! release’s, the best of which would have charted nationally with airplay. Max Splodge was right, it’s the establishment who’ve tried to bury oi! because it’s to bloody real for them. It reminds them of the millions of disaffected youth their policies have thrown on the scrapheap. The record companies hate oi! because it tells the truth. People like Dickhead hate oi! and try and belittle it because they are wet liberal middle class fools who hate the working class, who hate the British people’s proud traditions (which span Wat Tyler as well as Max Miller and Dixie Dean).
To the middle class twats who buy this book for their coffee tables, I’ll sign off with a quote from Blitz, who’ve single-handedly justified oi! by creating the best punk album since ‘The Clash’ in 1977: “Its your hate on which we feed/We are the new class,we are the new breed/Send our regards to a nation on fire/And with love a bouquet of barbed wire.” SLEEP UNSOUNDLY SUCKERS! 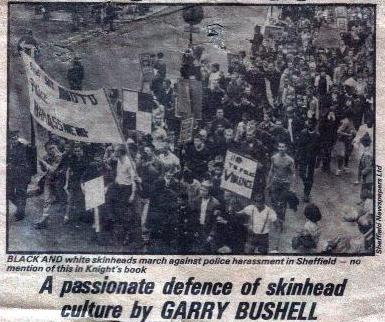 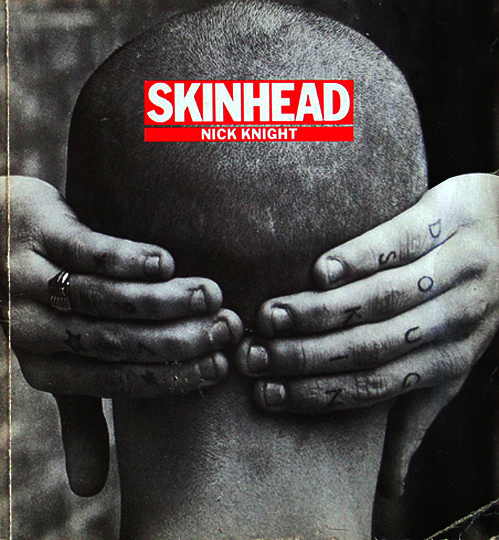