An interesting interview with Pat Nevin from Xmas 1983.
Football was still a working class game then, both with the crowds and the players. Pat was one of a new breed of players coming through; thoughtful, aware and known to be a bit left-wing.
He also made an appearance in a 1986 Ted Chippington video.
Ranting had a fair presence on the football terraces and it was an arena for much of the music, fashion and politics (and aggro) of the time. 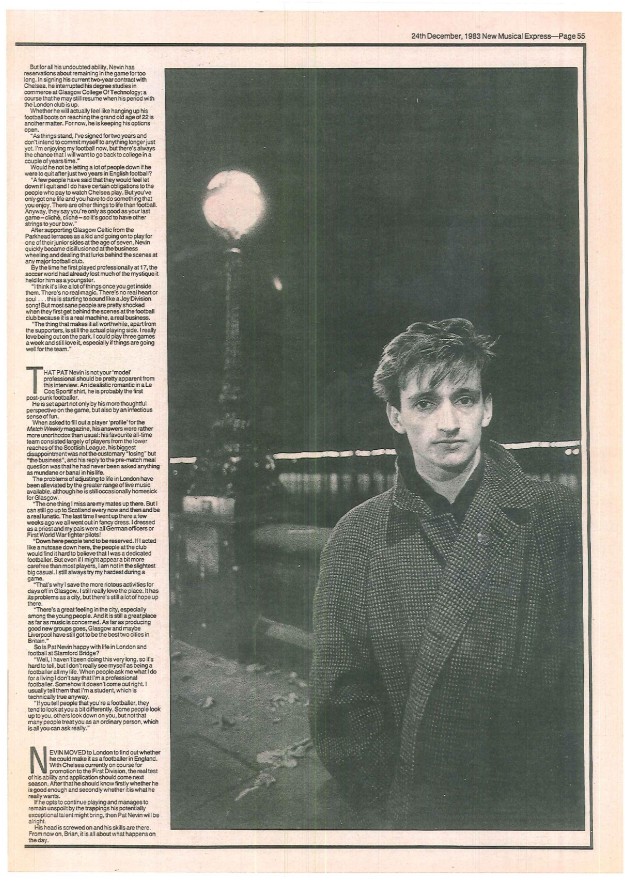 From Street Life, February 7-20, 1976
An early British interview with the great Gil Scott-Heron. 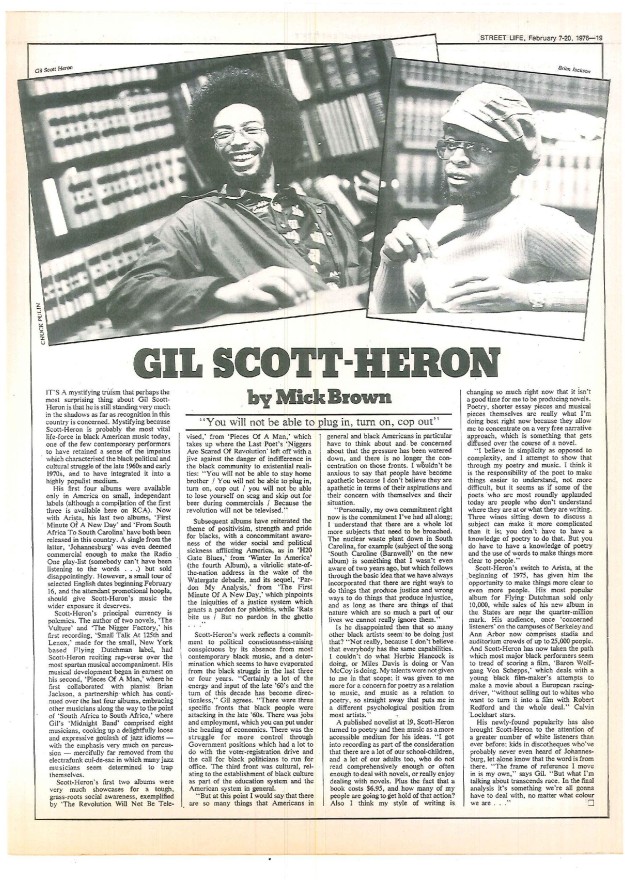 Time for Action: Tales from the Pact recited to John Opposition

George of Action Pact leans against the outside wall of a North London pub, transfixed by the merciless lens of the hideous Mottram. Spotting yours truly on the other side of the road, she delivers a high decibel: “WHERE YOU GOING!”

Yes, it’s true; she talks and shouts just like she sings, and you couldn’t mistake that voice anywhere…

And that’s where Steve Keaton’s review of Action Pact’s debut album, ‘Mercury Theater’ gets it all wrong. He says he can’t get through it without George’s vocals driving him completely up the wall; the fact is that the lady has the most original and and appealing vocal style I’ve heard in a long time.

And it is precisely George’s voice, delivering Dr. Phibes’ intelligent and challenging lyrics, which set Action Pact apart and make them such an excellent band. At a time when a hundred identikit punk bands assault our ears with ‘songs’ which are virtually indistinguishable from one another, an Action Pact record can ONLY be Action Pact.

Shining out like a beacon among Peel’s German experimentalists, bringing welcome power to Jensen’s worthy efforts, releasing two positive and inspiring singles, and now an album which ranks among the best of the years; a fine track record for any band, but despite the sessions – the band specifically asked me to thank Peel and Jensen for their support – and healthy record sales, they’ve had their share of problems.

The original drummer, 16 year old Joe Fungus (silly names are a specialty with this lot!) left some time ago, and they had considerable problems finding a replacement, which meant several months off the road.

The original bass player, Dr. Phibes, who has written most of the lyrics, decided to call it a day after recording the album, although he’ll still be writing for the band.

So now they’ve two new members, in addition to George and guitarist Wild Planet: ‘Philthy’ Phil Langham, who used to be in the Dark (but has now seen the light) on bass, and the superbly-named Grimly Fiendish on drums. With a settled line-up and a new album, they’re all set to make up for lost time.

“The thing that really pisses us off”, they tell me over a few pints, “is that image and dress sense seems to be far more important to a lot of punk fans than the music itself.”

“If you don’t look right, if the way you dress doesn’t correspond with the type of music you play, a lot of people tend to ignore you – or, even worse, attack you. We don’t have any ‘image’ at all; we dress how we want, and George isn’t one of these girl singers who gets her tits out on stage. If she wore fishnet stockings, and we were all dripping leather, then we’d probably get a lot more people at our gigs.”

When I saw them supporting the Adicts at the 100 Club (“One of our worst gigs – ever”) it was certainly true that the audience reaction was apathy incarnate, and though things have improved, they’ve still a long way to go to catch up with the likes of Discharge.

The album will do the trick, though; like all positive bands, they want to cross over to a more diverse audience, and their intelligent approach and original songs will guarantee them a following outside the traditional boundaries of punk.

“We’ve got Sid Vicious to blame for all this heavy bondage nonsense. The original Pistols were just an ordinary bunch of blokes, then Sid came along with the chains and the violence and gave us the problems we’ve got now.”

The thing about Action Pact, though, is that they are genuinely unconcerned about the fruits of commercial success, and play in their band purely and simply because they enjoy doing so.

They’ve all got jobs (“And we’re bloody lucky”): George works for Scotch Tape, Wild Planet on a building site, and Grimly Fiendish is a bank clerk – no jibes, please, and he assures me that he’s very soon going to be an ex-bank clerk, the way things are going. As for Phil, his occupation is top secret information; rumour has it that he works as an industrial spy for an Albanian tourist agency. Oh well…

Many bands claim they’re not interested in making money, but Action Pact seem to mean it. I make the point that a successful band will always make money for someone, their manager and record label if not themselves, and that they deserve the fruits of their labour more than anybody else.

Of course they agree with that, and declare a desire to make their living out of music, but George is rather cagey: “I’m not sure I’d give my job up, you know; even a really successful band only had a few years together, and then what do you do? In this day and age you wouldn’t find another job easily.”

Their genuinely socialist attitude is reflected in two ways; firstly they don’t see the band primarily as a money making concern (which means that other people may well be able to make money out of them) and secondly they are aware that to have a job in Thatcher-ravaged Britain is an achievement not to be thrown away lightly.

As well as being positive and enthusiastic people, Action Pact have a well developed sense of social responsibility, which reflects itself in their songs; anti-violence (“London Bouncers”); anti-war (“Protest is Alive”); and most definitely anti-fascist (“Losers”, and “Fools Factions”).

For me, though, their finest song is “Blue Blood”, an aggressive statement against privilege – and especially royal privilege: “I’ve been taught a lot of things since my first breath/Like respecting power until my death/But that’s one thing I just can’t do/No-one, nowhere, has blood that’s blue!”

But this is no “anti” band; as much as to make statements, Action Pact are in it to enjoy themselves, and their enthusiasm is infectious. I mean, it’s impossible to take a band that seriously when they’ve got names like Grimly Fiendish and Wild Planet… So what’s in a name?

“I’m called Wild Planet because I’ve got an obsession with the B52s – one of their albums was called that. Grimly Fiendish is a character in a comic that used to be around a few years ago.” (yes, I remember that one!) “Dr. Phibes was a film character. And by the way, you haven’t heard the full story behind Dr. Phibes’ leaving the band. He had this really successful solo career going, you see, and after his number one hit he couldn’t handle it anymore. Dr. Phibes is really… Renato!”

The question is, then, is George Renee? You learn something new every day! Anyway, I always thought Renato was Italian; this lot come from Stanwell in Middlesex, a dormitory town in Barton territory very near Heathrow Airport. This is the new ‘Sound of the Suburbs’; fittingly, the Members come from not far away.

There’s a song about their home town on the ‘Suicide Bag’ EP: “Stanwell, what have you given me?” sings George, petulantly. Understandable when you consider that George has the dubious pleasure of living next door to a certain Mr. Jack Payne, the town’s present Tory MP (although hopefully he won’t be come Thursday).

George is quick to point out that the upmarket nature of her neighbours doesn’t imply she’s rolling in money, though it must be pretty embarrassing for her!

The title of the album, “Mercury Theater on the Air Again” refers to an infamous incident on American radio, where the broadcaster managed to convince the listeners that loads of aliens had landed, and were about to take over the world. As Grimly (!) says, that’s rather like the paranoia-mongers who are at present doing their best to convince us all that the dreaded Russians have horns and tails and eat Christian babies for breakfast!

The album title is directed primarily at those appalling American nutters, the Survivalists, who hole themselves and their families up in isolated parts of the States and wait, guns at the ready, for the Holocaust.

Paul Roland, contributor of this parish, got it wrong; I’m not bitter in a negative sense, just aware of what’s happening and prepared to make the my infinitesimal contribution to the fight for change. Whether or not we get anywhere is another matter; judging by the opinion polls, the Great British Public really are a race of masochists…

Now that their line-up is secure, and the album is on general release, Action Pact are, hopefully, going to be gigging far more frequently than has been the case, up till now.

Like all the other REAL positive punk bands (and things really do seem to be looking up in certain quarters as far as the quality of our new bands is concerned), Action Pact combine awareness with enthusiasm and a fine sense of humour: they genuinely are a great bunch of people.

Next to their record company’s headquarters in Gaskin Street, North London, there’s a piece of graffiti which sums up the confusion of these damaged times. “CRASS”, it says, and then “BRITISH MOVEMENT”.

With bands like Action Pact, and songs like ‘Losers’ around, maybe the confusion can be sorted out. As George sings in her distinctive and emotive way, “Together we can end this — Together, I know we can!” 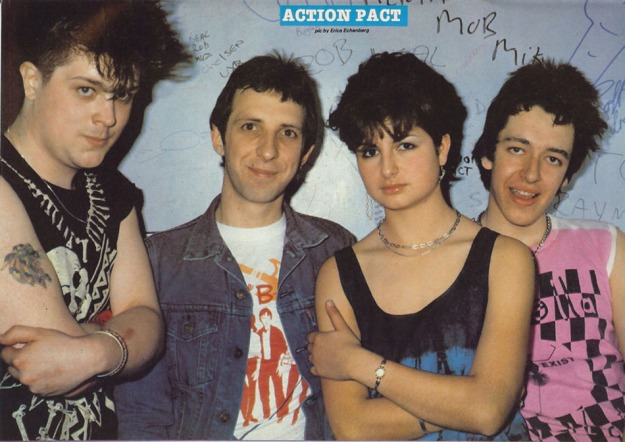 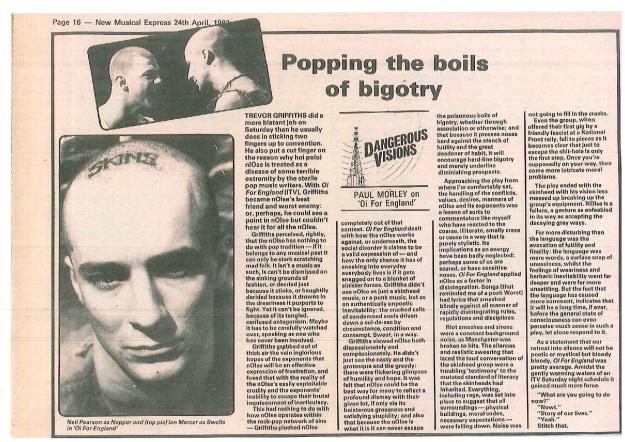 Matty was singing with Complete Control at the time of this but later went on to sing with Blaggers ITA, just as angry if more melodic. 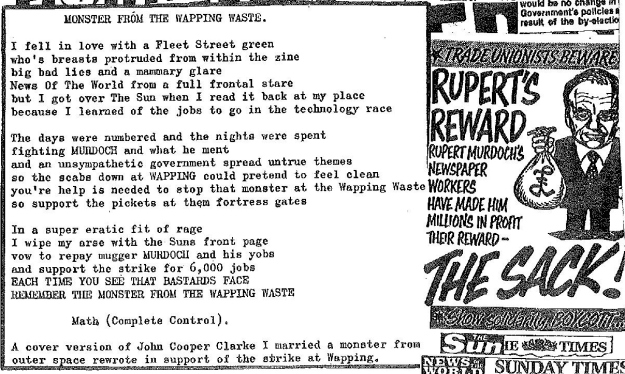 Back from a time, 1978 in fact, when the music press had some insightful writing and were doing some political articles. Pictures by Hackney legend and one time Basement 5 singer Dennis Morris. Nice to see Linton talking about snappy dressing too. Always important. 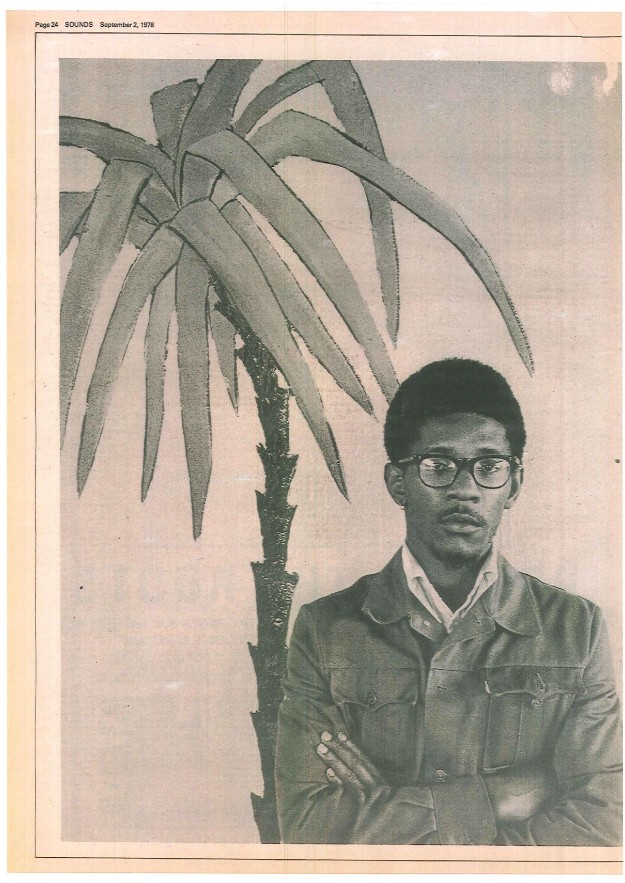 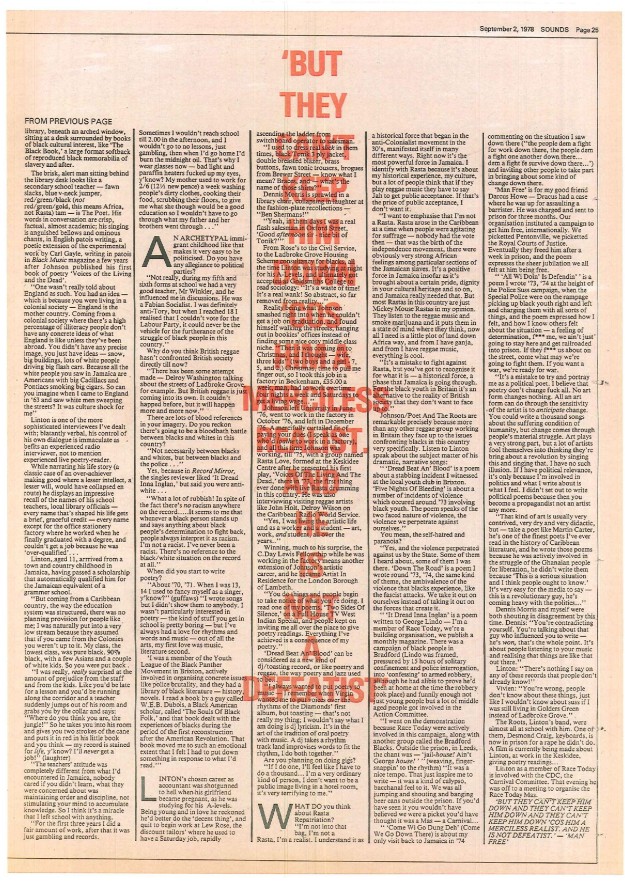 Salena was not a ranting poet, in fact she’s too young to be one. But she is one of the poets that were influenced by it and who developed her own style. She’s still doing sterling work today and this piece from 2000 is interesting in that it catches the moment between ranting poetry and where we are now with a busy and active poetry scene.
Things weren’t always that way and after ranting we fell into the mire of ‘performance poetry’. Thankfully the likes of Salena were there to kick boredom and propriety aside.

From the Xmas NME, 24/31 December 1983
This round up of the youth cults was penned by ranting poet Seething Wells.

From Sounds, September 2, 1978.
Review by reggae writer Eric Fuller of the re-release of U Roy’s album. 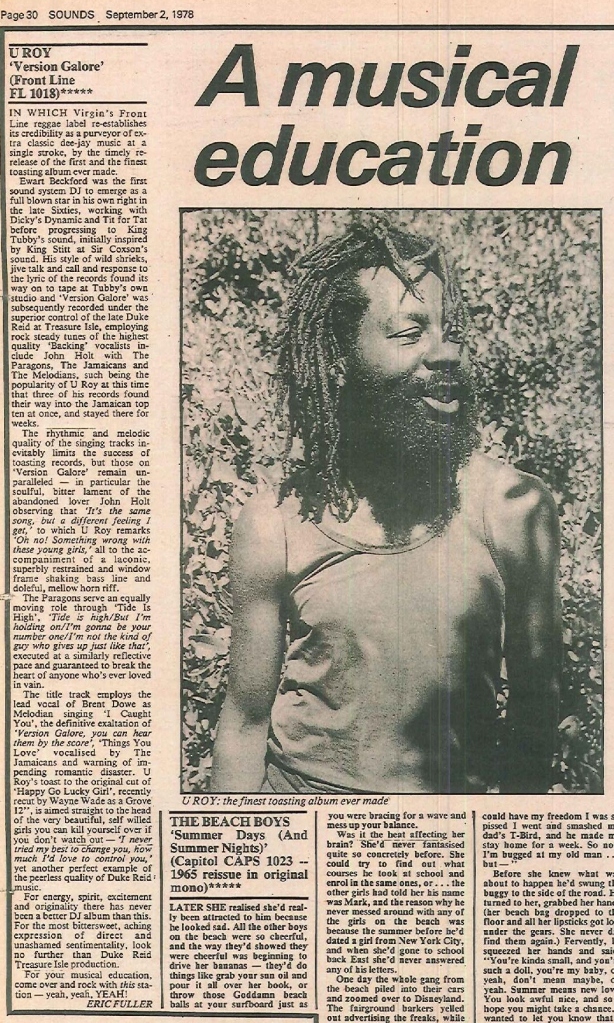 Nice to see the band that gave us the song Stand Up and Spit doing something nice, and top blokes they are too.