The super soaraway Sun not at all outraged about Benjamin Zephaniah being black.

Bit of a weird one this, horse racing commentator Peter O’Sullevan has an album reviewed by the NME’s reggae writer Penny Reel. 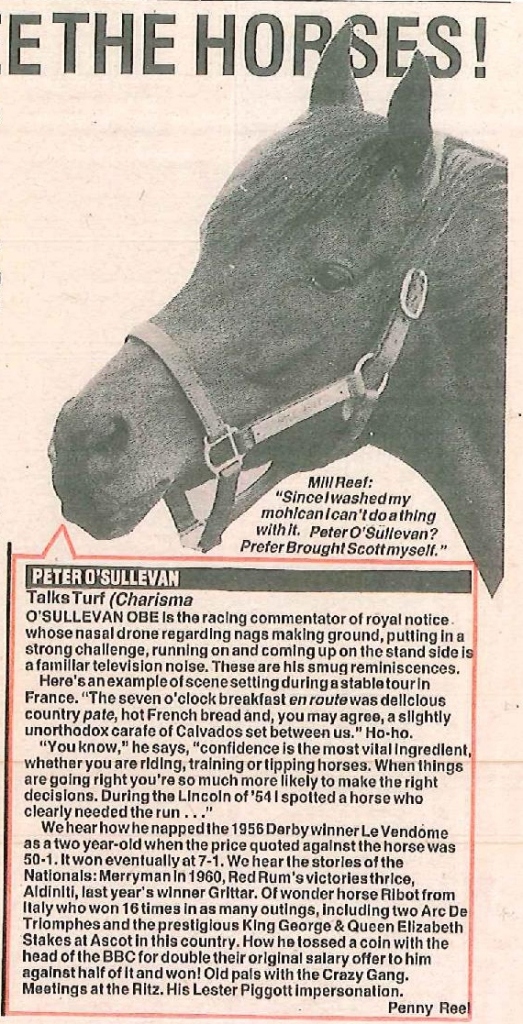 I grew up in the place in which I still live, more or less — the mining town of South Kirkby in the heart of the Yorkshire coalfield. Kirkby was a great place for a kid to grow up in. Big enough to have a high street, market, cinema, swimming baths, sports centre, youth clubs, football teams, recreation grounds and parks; small enough so you knew everyone. And nowhere in the town was more than a five or ten minute walk away from the countryside where me and my mates spent most of our time, bird-nesting, rabbiting, ferreting, coursing, kicking-off with farmers & landowners and generally pissing about.

Kirkby had two pits, South Kirkby and Frickley. My Dad and Grandad worked at Frickley pit. My uncle Clive, my Dad’s twin, worked at Kirkby. Most men I knew or knew of worked at one or other of the pits. There were over 5000 jobs at those pits in the 70s. The NUM branches at those pits were among the most militant in the country. Even when the rest of the industry was at work they were likely to be on strike — especially if the sun was out.

A turbulent, radical, confrontational political streak — rooted in the pits — ran through the community. It was a kind of politics that didn’t shrink from violence. I first encountered this in 1978/9, when me and my mates belatedly discovered punk and began attending our first gigs, many of which were organised by Rock Against Racism. At a RAR organised Mekons gig in Castleford some drunken racists — big, hard, beer-bellied blokes — burst in and set about some students. Some of the SWP-affiliated lads from our group led the retaliation and the boneheads got a severe shoe-ing. After that night me and my mates joined — or at least became fellow-travellers with — the SWP. 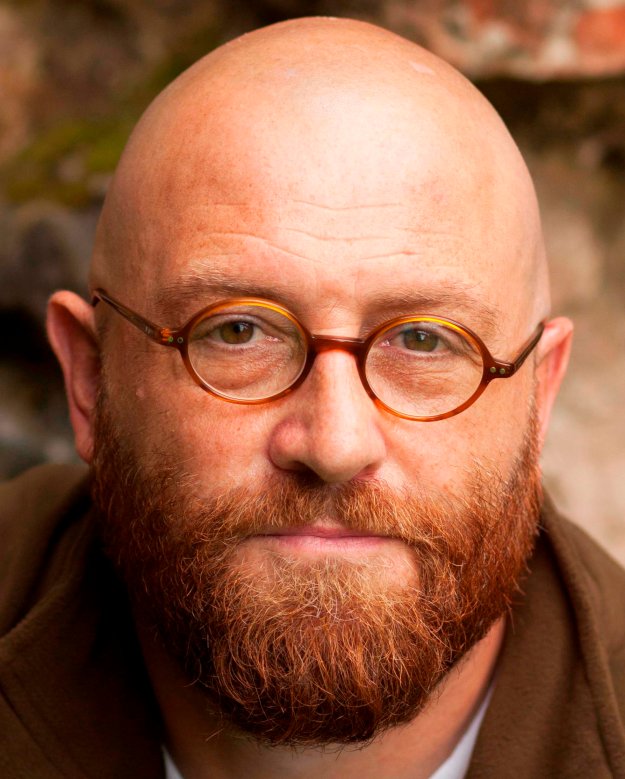 In the late 70s/early 80s our multi-tribal RAR/SWP group — schoolkids like me, students, journalists, miners, engineers, office workers, factory workers and unemployed, in our respective guises as punks, skinheads, grebos and so on, attended demonstrations, picket lines, festivals and gigs all over the country, watching bands as varied as the Gang of Four, the UK Subs, the Clash, the Au Pairs, the Banshees, Stiff Little Fingers, the Specials, Madness, Penetration, the Jam and Motorhead. Political violence was never far away at these events, with the neo-Nazis of the British Movement, the National Front, Column 88 and the original BNP being our main adversaries.

The far-right had a particularly strong presence in Leeds. I remember being part of a counter demo that successfully disrupted a National Front rally there in 1980, and being part of a group — with local ‘West Indians’ and Sikhs — that fettled the rash of Bulldog vendors in the town centre one Saturday morning. There was an ongoing running battle with the British Movement — disrupting meetings, tearing down posters — in particular that seemed to last years.

The far-right used to recruit and sell papers at Leeds United’s home games and there was a nasty racist streak in the crowd at Leeds during the 1980s. This posed a problem for South Kirkby based socialists, as the town was a hot-bed of Leeds United support (our next door neighbour Pete Walton ran the local supporters club, which had over 600 members — in a town of less than 15,000) and inevitably, some of the Elland Road-centred organised racism began to bleed into Kirkby, with some locals joining the far-right groups. This situation was further complicated by the fact that a couple of our SWP/RAR group were also members of Leeds’s notorious hooligan Service Crew, which became associated with the political right in the mid-80s, although the lads in question were — and remained — militantly red. They just enjoyed a fracas.

This football/hooligan/political militancy/political violence crossover became a story of its own during the Miners’ Strike, when, in November 1984, the Frickley Athletic vs Stalybridge Celtic first round F.A. Cup tie in neighbouring South Elmsall degenerated into some of the most sustained fighting I’ve ever seen in any context. Three hundred Man U hooligans doing some strike-tourism entered the ground chanting ‘Arthur Scargill is a wanker’ — and got absolutely battered, as you might imagine. No police were stationed in the ground for the match, as their presence would have been too inflammatory, so the fighting went on for about half an hour completely unchecked. When the police finally arrived — en masse and in full riot gear — it got worse.

I’ve written some poems about this whole period in my book, Englaland. In the dedication to the first poem, Jim Nightingale is a friend of mine who inducted me, as a teenager, into the SWP/RAR. John Clark was a school mate and part of our little gang, who died tragically young from a brain haemorrhage.
* * *

For Jim Nightingale, in memory of John Clark

Having pissed away our Christmas money
getting under-age hammered in the Plough,
Red Jim’s party in Centre Street called.
Clarky got the invite through their Col,
a combat-jacketed, Trotskyite journo
who worked for the Sheffield Star. We were punks,
two years too late, as early as we could get there,
angry, attitudinal, raw with unfocused rebellion:
ripe for evangelisation.
Dread Beat an’ Blood
was shaking down the walls from fifty yards
away. The door opened to laughter
and spurting lager, a smell I guessed was dope.
Strange things were afoot: the front room was postered
like Wolfie Smith’s bedroom – like my bedroom –
Marx and Marley, the stencilled fist
from Power in the Darkness; there were men
wearing suit-coats over jeans and t-shirts,
women casually bra-less in loose-knit
mohair sweaters; lit candles in wine bottles;
people actually drinking wine, from TV’s
long-stemmed glasses. ‘Beer Mon?’ from the kitchen –
a real-life rasta, handing out Heineken.
And in the ransacked pantry, the night’s
stunning revelation – a yard long pack
of Buitoni spaghetti, exotic
as absinthe.
Who lives in a house like this?
We cornered the cans and set to supping
at the kitchen table, where at length
Jim found us, and put us through our paces,
discussing the Clash and TRB,
Trident, Thatcher and the National Front,
before finally getting down to it —
Marx and revolution. Softened up
by Clarky’s Socialist Workers and Neil Spencer’s
pink NME, we weren’t found wanting.
We signed on the line and a fortnight later,

boarded the bus to Castleford Civic Centre
for our first live gig: Rock Against Racism,
the Mekons with Galaxy supporting.
Galaxy were disco, four handsome black men
in sequined shirts pastiching Kool and the Gang.
Col Clark clenched his fist in solidarity
and shouted at the soundcheck — ‘Dillinger!
Big Youth!’ The lead singer grinned and shook his head —
‘We’re R&B mon, we don’t do reggae!’
Some beer-guts in flares crashed the concert
to kick-off with the freaks. Skinny socialists
converged and battered them out of the exits.
It was an eye-opener.
The paper every week,
‘Support the Steel Workers, General Strike Now’;
The monthly journal, International Socialism,
‘Lessons from the Revolution in Iran’;
Anti-Nazi League pamphlets, ‘The National Front
is a Nazi Front, Smash the National Front’:
a few months later, in Chapeltown, we did,
breaking through the cops’ cordon and piling
into the parade of sieg-heiling boneheads,
Sikhs and ‘West Indians’ fighting beside us,
dragging loud-hailered Webster from the back
of his PA-ed flatback, putting in the boot:
Black and white — unite and fight.

A St. George’s Day rally
in the heart of Sikh Southall,
NF freedom of speech/intimidation
underwritten by the council
and the Special Patrol Group,
who clubbed Peach to death
and left his body on the street.
Eight thousand Sikhs
paid their respects at his open coffin.

A year or so later
on Harehills’ immigrant streets,
we were jumped by British Movement skins
as we tore down their posters
near the Fforde Green pub.
Protecting my face,
I was gashed in the palm
by a broken bottle,
as we fought for our lives
in a running skirmish
along Roundhay Road.

At school on Monday,
I wore that scar with pride.
But I wasn’t the weekend’s
only casualty:
Gelderd-Ender Mick Grant
was sporting a proper shiner.

From Sounds, 20 January, 1979
Myself and Porky the Poet were huge fans. A track from the album gives the blog and our live events their name. 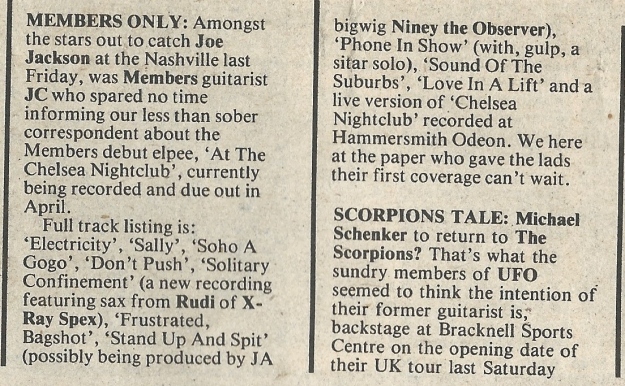 The Where’s Bill Grundy Now? EP from 1978 was a cracker and the Part Time Punks track on it has rightly become a classic.

US punk band Millions of Dead Cops write up their 1982 European tour supporting the Dead Kennedys for the biggest of the hardcore punk ‘zines that sprang up in the 80s. This is worth a look for their impressions of the UK, especially of ranting poetry. Worth noting the amount of violence at gigs too,pretty typical for the time I have to say. 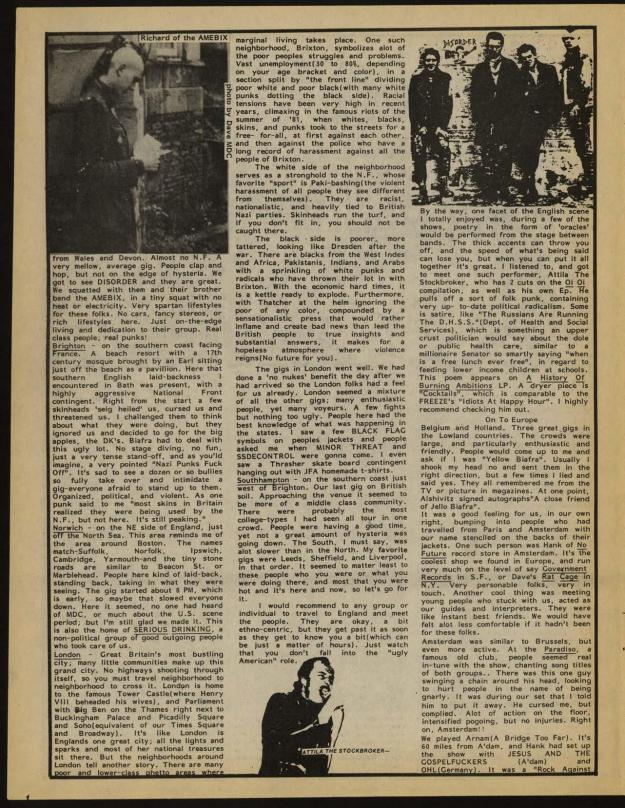 This is an excert of a letter Frederick Engels wrote to Hermann Schlüter in 1885.

The Marseillaise of the Peasant War was: Eine feste Burg ist unser Gott, and conscious of victory as the text and melody of this song are, it cannot nor need it be taken in this today. Other songs of the time are to be found in collections of folksongs, Des Knaben Wunderhorn, and the like. More may perhaps be found there. But the mercenary soldier largely pre-empted our folk poetry even at that time.

Of foreign songs I know only the pretty Danish song of Herr Tidmann, which I translated in the Berlin Sozialdemokrat in 1865.

There were all sorts of Chartist songs, but they aren’t to be had any more. One began:

Britannia’s sons, though slaves you be,
God your creator made you free;
To all he life and freedom gave,
But never, never made a slave.

I don’t know any others.

All that has vanished, nor was this poetry worth much. In 1848 there were two songs sung to the same melody: Schleswig-Holstein, The Hecker Song:

I think that’s enough. Then the variant:

In general, the poetry of past revolutions (the Marseillaise always excepted) rarely has a revolutionary effect for later times because it must also reproduce the mass prejudices of the period in order to affect the masses. Hence the religious nonsense even among the Chartists …

Rhoda Dakar’s single is one of the most harrowing pop records. It got little daytime radio airplay but still reached number 35 in the charts. The record was played during the day once on Capital Radio and was then promptly banned from daytime playlists. Local stations could play it however.
Rape is discussed much more these days and the record did much to make people aware of the reality. Jerry Dammers, the songs producer said, “it is the only record that was ever made quite deliberately to be listened to once and once only”.
Attila’s poem ‘Contributory Negligence’ is based on the Judge’s crass remarks relating to the John Allen case.