As part of a series of 40 Years of Punk events, we did a poetry gig at The Roundhouse, scene of many a decent gig back when Her Majesty graced the cover of the Sex Pistols’ God Save The Queen.
Proceedings kicked off at one in the afternoon with a discussion panel talking about what punk had done for them.
Richard Boon (easily the world’s coolest librarian), Rhoda Dakar, Tim Wells, and Danny Fields were the panel. Dennis Bovell was due to be there but was stuck on a train or somesuch. Professor Matthew Worley chaired and kept things flowing.
Talk ranged over art school v hooligans, the Bowie precursors to punk, reggae, the politics (or not in Danny’s case) of punk, as well as a mantion of the Foxton’s ‘punk’ Minis currently ferrying gentrifiers to ruin London. Talk was sparky, Richard Boon was his usual wry self and Rhoda made some pertinent observations about people finding thier own space, or spaces in fact, as well as throwing in some good laughs.

Phill Jupitus‘ first poem was suitably about the first band he’d seen: Blondie. Phill was an original Ranter, as Porky the Poet, and is still one of the best loved gigging poets today. He delivered some new work as well as Ranting classics such as They’ve All Grown Up in the Beano.
Tim Wells, another one-time teenage Ranter, was up next and gave us some observations on goths being sick on the buses as well as a snook cocked at gentrification. Wither those Foxton’s ‘punk’ Minis.

I’m not sure of who read in what order now, there was lager and I was drinking it. But Kate Fox proved why she’s known as ‘the lovely Kate Fox’, she takes a more gentle approach but undercuts notions of class, gender, and in particular, northerness with charm, humour and a definite punch when needed.
Liam McCormick was a poet I’d not heard before. He’s Scottish whippersnapper and definitely showed a lot of promise. He skewered sectarian bigotry and stood up and spat with the best of ’em.
It’s been a looong time since Garry Johnson has gigged. One of the things that is most special about the Stand Up and Spit gigs for me are getting established poets gigging alongside names we’ve not heard from in a while as well as some of the young poets today with the same bile, fire and anger.
Garry showed that from his first poem: Young Conservatives.

Too right Garry. Garry read some of his poems that people know from the Oi albums, as well as a couple of new numbers. Don’t leave it so long next time, Garry!
Things took a turn for the sweary with Sophie Cameron. Demure she may appear but she’s devastating. Swearing can be all too easy, but Sophie is about the imagery rather than the curseword, and she had the audience creasing up. Tindr and posh cunts were both targetted. She delivered a hilarious set, she was more shocking, and in a good way, than many of the punk bands who gigged later.

The Roundhouse have a team of resident poets and one of ’em is Joseph Beaumont-Howell who did a turn. Lively and energetic he kept the pace fast.
Our last poet was Linton Kwesi Johnson. He read poems from the 70s, starting with Five Nights of Bleeding from 1972. Without them being mentioned directly, you could feel the pressure of Brexit and #blacklivesmatter implicit in his words.

It Dread Inna Inglan, his next poem, is also one that resonates still. Several of us, Phill, Rhoda, Richard Boon, myself and surely much of the audience saw Linton read in the late 70s and early 80s and he’s lost none of his presence and power. His final poem really brought the point home: Licence Fi Kill, and those of us who’ve also been seeing Linton read since those early gigs have also been stood outside police stations, on picket lines and marched in protest against the police killing people. It’s wrong it’s still happening, it’s wrong it’s a battle still being fought but it’s empowering that poems like this bolster us and young people are taking to the fight. 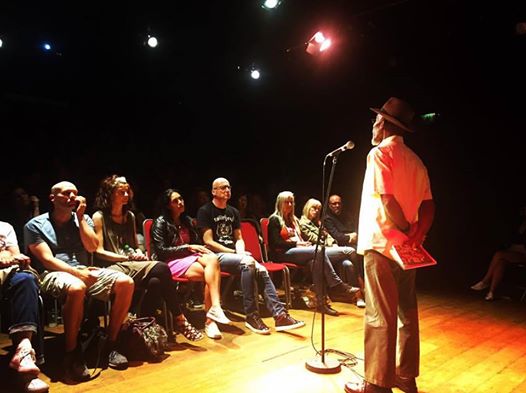 To wrap up the night Thee Jezebel’s guitarist, Laura Anderson banged out a couple of punk hits for singalong and was joined by Tim Wells and Phill Jupitus for a messy rendition of Hurry Up Harry. From there we didn’t go down the pub but went through to the main space of the Roundhouse to catch Thee Jezebels do a proper set as the first of a run of punk bands gigging through the evening. Their glamtastic Chiswick ‘ooligan sound is a winner.

That wasn’t enough though! Joe England had a stall selling copies of the best literary ‘zine on the go, Push. It was great to see Joe’s stall shut up early as he’d sold out whilst the kewl kids found it slow going.

From there the lager really started flowing. So much so that Sophie Cameron did an impromptu set on the terrace as people wanted more from her now they were lubricated. Once is never enough for her. 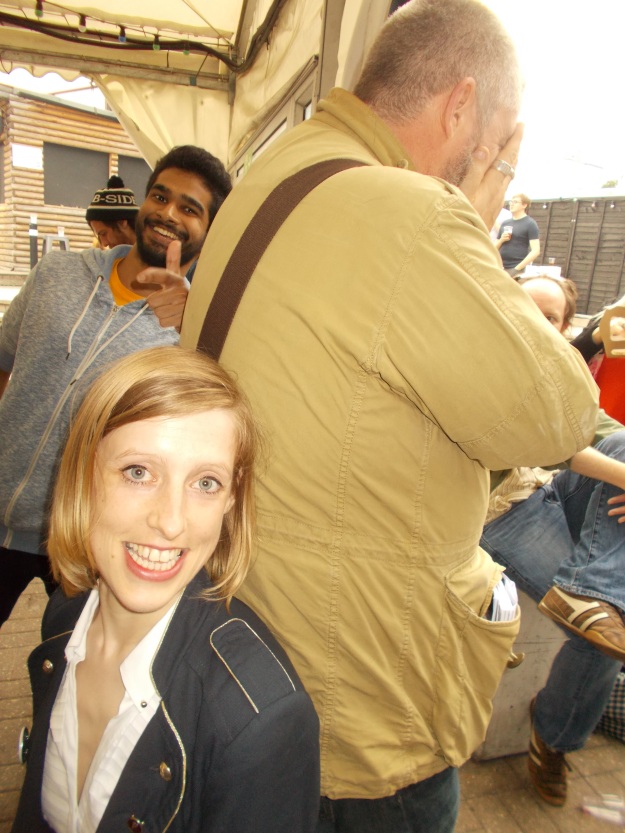 We had a great time. The poetry was saying plenty, and it raised some smiles too. We need both.
A big thank you to all the poets, and especially to Speaking Volumes and Arts Council England for making the event possible.