A strange clipping on the birth of Linton Kwesi Johnson as highlighted in the NME, 9 April, 1983. 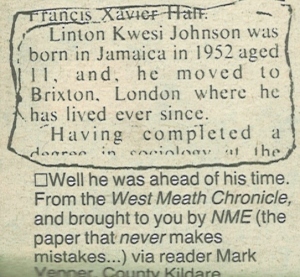 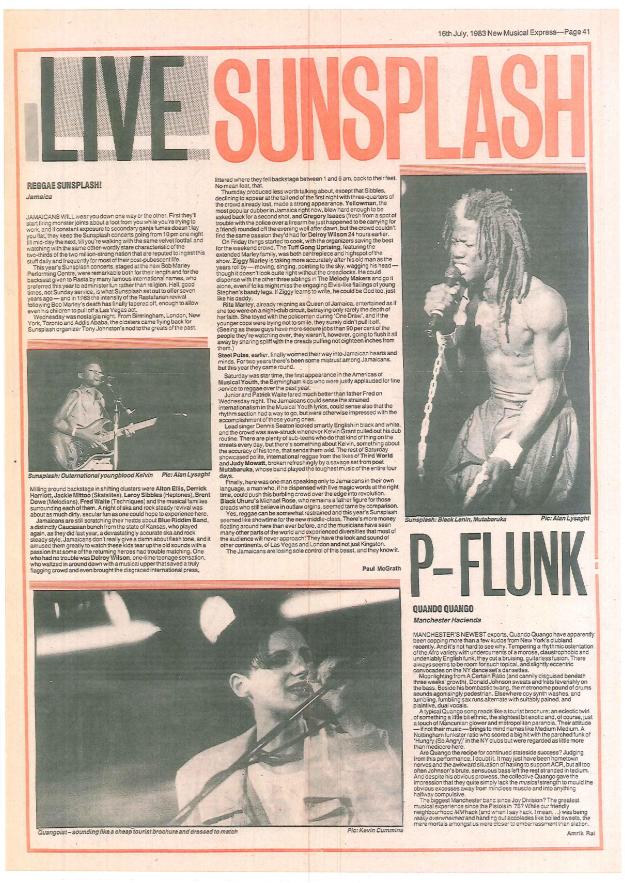 The Members’ first album gets a review in the NME, April 7, 1979. Along with the Ruts, The Clash etc, The Members were adding a decent dollop of reggae to their punk. The album was a big fave of mine, still is, and contains the track the blog is named after.

Sounds of the Suburbs: scorn or sadism?

The Members
At The Chelsea Nightclub
(Virgin)

The Members – an everyday story of Camberley folk starring cuddly ugly Nicky Tesco, dealer in trite stereo-types and women’s magazine cliches, harmless and humourous as a rock’n’roll Mrs Dale ought to be.
Open the diary, they’re all there: ‘Sally’, the local kid made good who gets disfigured in a car crash – the awful fate awaiting all jet set models; ‘Soho-A-Go-Go’, where you meet soulless women who will destroy your soul – another awful fate for would be thrill-seekers; ‘Solitary Confinement’, the lonely bedsit awaiting all those who fall for the lure of London’s tinsel; ‘Frustrated Bagshot’, the jerk who jerks off in the darkness alone – the awful fate awaiting hung-up porn-mag consumers; ‘Phone-In Show’, where Samaritan cases discover the awful fate awaiting innocents who put themselves in the hands of contemptuous radio demagogues; ‘Chelsea Nightclub’, where the posers meet their lonely fate…
‘The Sound Of The Suburbs’ indeed – a fistful of cautionary tales like your mother used to tell, only Nicky tells ’em better.
The album opens with a little Members dub called ‘Electricity’ by rhythm guitarist Jean-Marie Carroll, which shows off their blending of reggae and rock to far greater effect than the new single ‘Offshore Banking Business’ (not included here, incidently – which is sensible, because it would be a complete sore thumb. I can understand Julie Burchill labelling it “white kids proving they don’t dislike balcks” – Tesco shouldn’t ever drop his Sarf London accent, either for awkward sincerity or pseudo-West Indian, both of which rub shoulders on the single)
‘Electricity’, though, is really good – atmospheric blips over an attractive bass riff alternating with some excellent rock guitar from Nigel Bennett, expertly produced by drummer Adrian Lillywhite’s brother Steve. The Members display a fluent, sinuous side previously unrecorded.
That segues (as us bar-proppers say) into ‘Sally’, a terse rocker spliced with a neat reggae chorus: “Everybody’s got a daydream…” and Sally’s modelling dream winds up in the whorehouse – possibly a comment upon people who sell their bodies (a parallel the song does draw), but couched in yer traditional paperback romance gruesome warning style. Written, incidentally, by the band’s ex-guitarist Gary Baker.
Next up is Nicky Tesco and bassist Chris Payne’s tour of Dean Street’s massage parlours, ‘Soho-A-Go-Go’ – another fierce hard rock songreplete with police messages over the lead break, tesco warning the vice kings to “clean up your state of mental health”. As always, the construction is perfect, finely judged climaxes a-go-go (so to speak), with tesco chucking in some great Joey Ramonisms en route.
‘Don’t Push’, more Cossack than Rasta, is a longtime stage highlight. Again, it’s suprisingly powerful, Bennett yanking it along with abrasive guitar.
‘Solitary Confinement’ should be the side’s crowning glory – it’s a brilliant song – but instead of keeping to the point, which is quite ornate enough as it is, they drag it out into a dreadful jam at the end an rather piss it away. Still, who else could carry off that exquisite moment when the tragic chant “On your own/ By yourself/ On your own/ By yourself” twists evilly into “Buy yourself this record”?
‘Frustrated bagshot’ opens the second side on a real low. As if the dreader watery slide guitar wasn’t bad enough, the song paints a vicious picture of sexual frustration, machismo mockery of the ‘afflicted’ – a theme repeated more sympathetically in the one completely ‘straight’ reggae song ‘Stand Up And Spit’, which is strangely reminiscent of XTC’s ‘My Weapon’.
‘The Sound Of The Suburbs’, as any fule kno, is a masterpiece, from the rabid illustration of Johnny annoying the neighbours with his punk rock electric guitar, to the woman next door who hasn’t left her house since her husband died. Its confidence and sheer compositional flair rub off on the whole album.
‘Phone-In Show’ brings back the doubts: another skilfully drawn song, but although they put down the vicarious nature of phone-ins – “Cheap entertainment/ Phone-in show/ Five minutes of glib advice/ When you’ve got nowhere left to go” – they seem to portray the guy who phones in with his hang-up with venomous glee. Hopefully I’m being unfair to them and their concern to put life’s losers in the harshest possible light is out of sympathy rather than sadism.
‘Love In A Lift’ is a good lop-sided reggae rock throwaway, and the wrap-up comes live from Hammersmith Odeon with the ‘My Generation’ mutation ‘Chelsea Nightclub’, featuring Tesco looking for the toilet in the midst of the chaos.
Before I heard this album I’d tagged The Members as a good nght out, a band with more enthusiasm than technique despite some of the best lyrics currently on view and a couple of classic singles. Don’t let the good buncha lads front fool you – they know what they’re doing. The most suprising thing about ‘At The Chelsea Nightclub’ is how painstakingly it’s been assembled. Each track literally overflows with little tricks and subtleties.
Whether they’re trapped in sweet suburbia remains to be seen – certainly the awkward gestures of ‘Offshore Banking Business’are not the way out.
And as for the occaisonal ideological slips, just put it down to the sad fact that rock’n’roll stars, unlike rock journalists of course, are not omniscient.

Poet Dominique Dunne with the NME and Nicky Tesco on the cover. 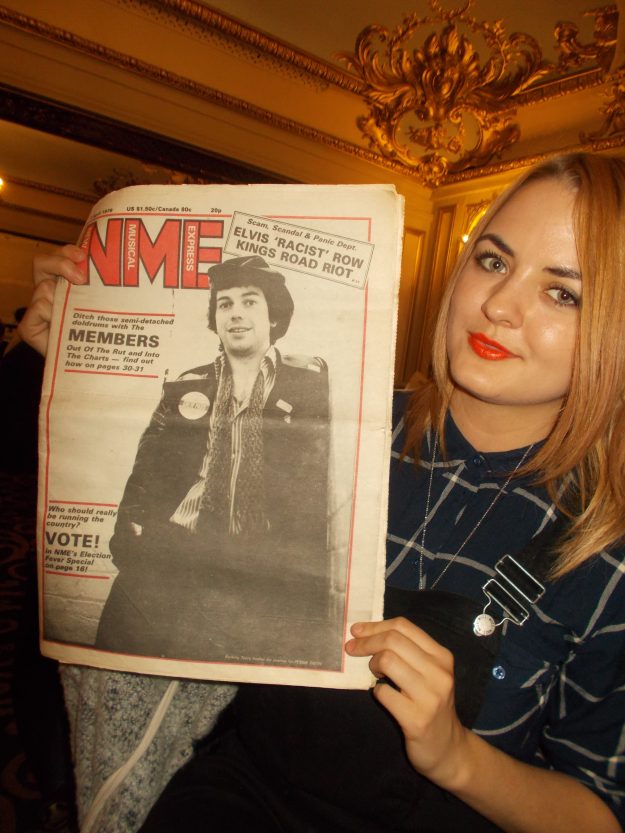 Five-O were a punk band from Sarf London that formed in 1978. They had one of the better tracks on the 1982 ‘Oi! Oi! That’s Yer Lot!’ compilation: Dr Crippens. Their singer Simon also did some poetry gigs.

We Don’t Sit Round The Fire Roasting Chestnuts Like We Used To, Do We?

We don’t sit round the fire roasting chestnuts like we used to, do we?
What? I said
Are you talking to me?

She nodded her head and went on:
Those chestnuts and fires and all those old songs
Where have all those days gone?
Where did the country go wrong?

I switched on her deaf aid
and said, Listen to me…
But before I could speak
her withered hand gripped my thigh
her head hit my shoulder
and she started to cry

I said, Listen luv, before you die (pause)
just think about that old fireplace
and the rotten old chestnuts
they threw in your face
Don’t you remember how you roared
“I’m not eating mine
I want the man-next-door’s”

Then you were too young to be heard
and as you grew up you were taught
not to say those words
and that’s why you feel sad
because you didn’t get anything
you should have had
And, y’know, that’s your own fault

Ah well, she said
This is my stop
I’ve gotta get off now
And off she got
And I couldn’t help notice that she had a very naughty glint in her eye

The next day I heard
that they’d knocked
on her door
You’ve got to move out
We’re sorry you’re poor
but you know the law is The Law
We know you’re not all
that quick
Here, let me help you
with your walking stick
(She motioned him to come close)

And said
“You’re always picking on young people, aren’t yer?”
And the Wak! The man in the blak mak she put on his back
And she roared just like she’d once roared before
“You can do what you like
Cos I’m on me bike”
And in the best of health she died

And millions of people read the story, shook their heads and said
Nutter
And they also said
We don’t sit round the fire roasting chestnuts like we used to, do we? 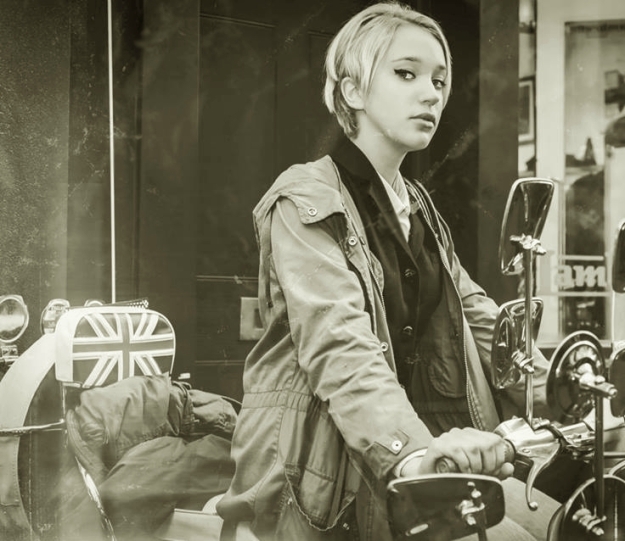 Lydia Lunch and Exene Cervenka get their poetry on in the NME, 9 April, 1983. 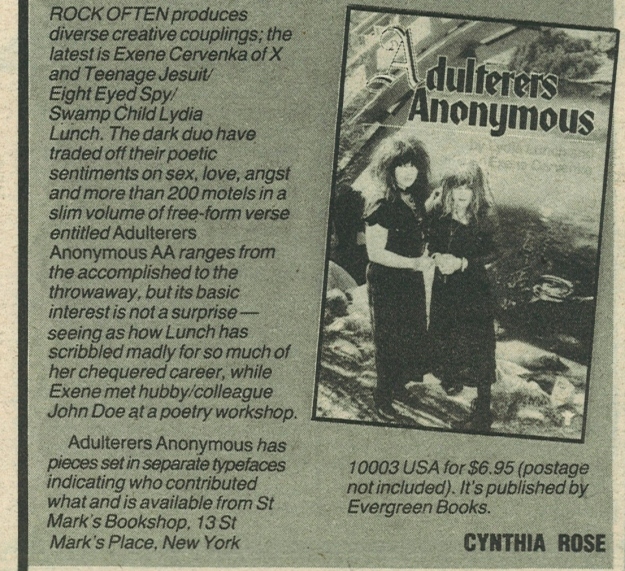 A review of John Cooper Clarke in the NME, 5 February, 1983 that sees ranting poets on the shoulders of the Guv’nor. The 80s weren’t Clarkey’s best years but he remained a gent. Back when I was a young poet, at that time, he got me and my mates into gigs and also got me on stage to read poems. 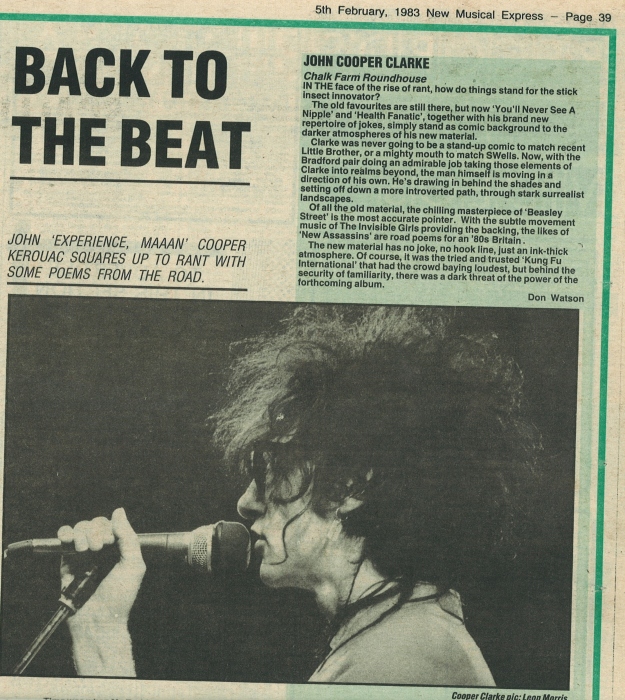 An early write up, from Sounds 30 September, 1978, of top drawer Derry band: The Undertones. 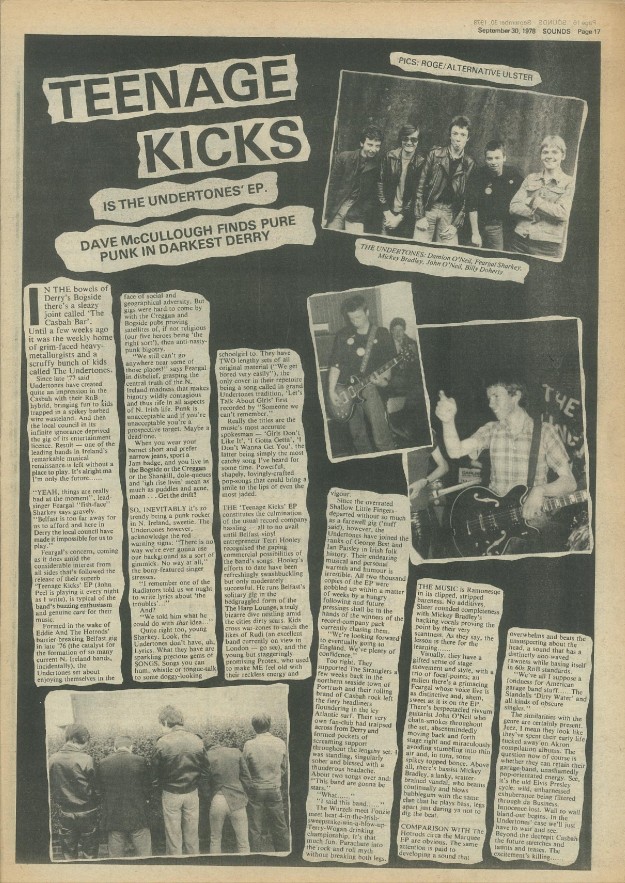 standupandspit
Create a free website or blog at WordPress.com.