Michelene Wandor’s article on the Poet Laureateship sets of a pre-facebook flame war, though obviously a much slower paced one. Firstly from Marxism Today, August, 1984.

Michelene Wandor expresses the attitude of MT when she writes (MT July 84): “In left-wing journalism poetry is feared or dismissed as bourgeois individualism and discounted by radical publishers as ‘not selling’.” Her articles are the closest thing to poetry it prints. With few outlets for ‘political’ poetry in the UK, radical journals frequently declare their commitment to it as a resource for the Left, yet only publish prose. This country’s tradition of political verse stretches back past Milton, yet left-wing journalists direct our attention to those writers who achived success through and after Punk. That many of these have revived some of the most banal poetic forms recieves no comment.
Many poets show ‘streetwise verbal richness’ (Adrian Mitchell, Roy Fisher, Tom Pickard, Geraldine Monk, Barry MacSweeny, Duncan Bush) but are interested in more than streetsense. These and other writers are attempting to deconstruct the realities of capitalism with language, and to construct new modes of thought and relationship which will hasten the material advance of Socialism. Yet, Mitchell excepted, no interest is shown in their work by those ostensibly devoted to all forms of radicalism.
What of the radicalisation of language?
If poetry is a valid tool for the Left, why do those who could facilitate its publication reject it ‘because it takes up too much space’? Space is given to those poets popular among London’s radical chic: is success therefore the definitive measure of value? Success in a publishing system obsessed with profitability, despite ‘radical’ publishing. That poetry should be subject to constraints applied to no other form of language: that it be as selfexplanatory as a cartoon and as lucrative as a pop-song; shows an immaturity in the perception of poetry that magazines like MT should attempt to change by publishing not articles about poetry but the thing itself.

Comrade Jafrate’s alleged taste in poetry certainly contradicts his desire to hear ‘streetwise’ oriented poetry (MT Aug 84). I assume by streetwise he means ‘by the working class, for the working class’, yet how many of these people does he see at poetry events?
The truth is that these events are poorly attended, the reason being that, as Adrian Mitchell said: ‘Most people ignore poetry because poetry ignores people’.
I am one of the punk/post-punk poets (though I’d rather be called a Ranter) he dismisses as being a revivalist of banalism. If I, and others such as Swift Nick, Attila The Stockbroker, Little Brother,
Seething Wells and Peter Campbell, are reviving banalism, then so be it, but we’re getting across to a big audience and attracting many people who never imagined they’d ever like poetry. We exist because of our fellow human beings, not in spite of them. We’re not in the business of dumping the listener in a verbal maze in mid-performance (and we are essentially live performers) and aurally torturing them as is the usual practice of the ME generation poets, but kicking poetry off its hallowed pedestal and taking it back to the people, spreading the word of unity and having a good laugh at the same time.
MT readers can learn more by sending 40p and a sae to Tirane Thrash, 161 Spencers Croft, Harlow, Essex. 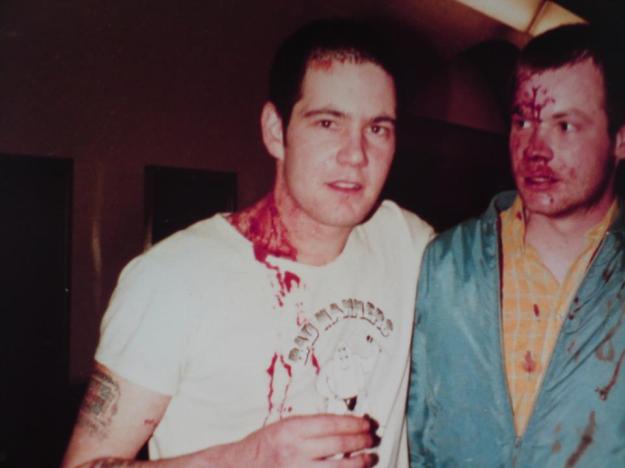