An impressive, and crucial, feature on reggae sound systems in the NME, 21 February, 1981. 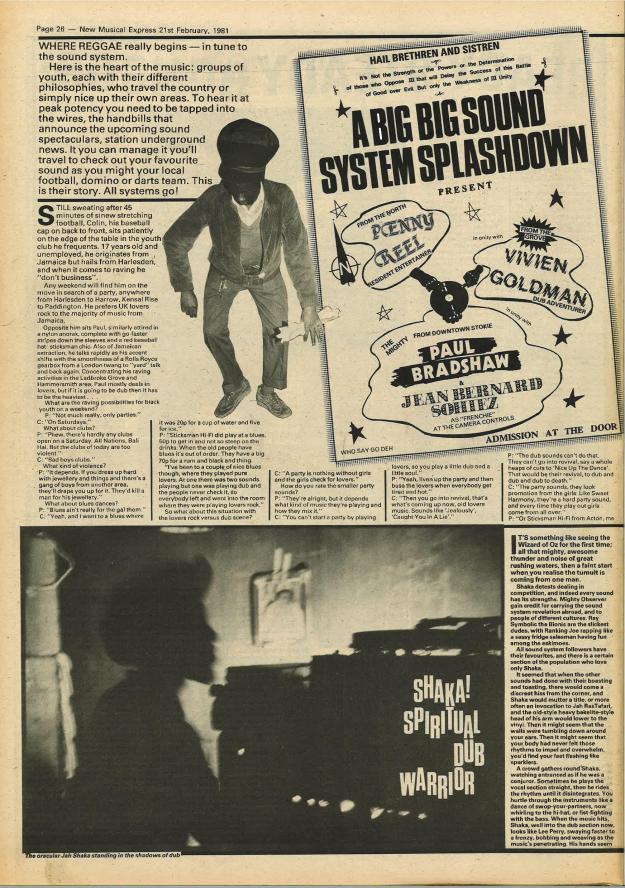 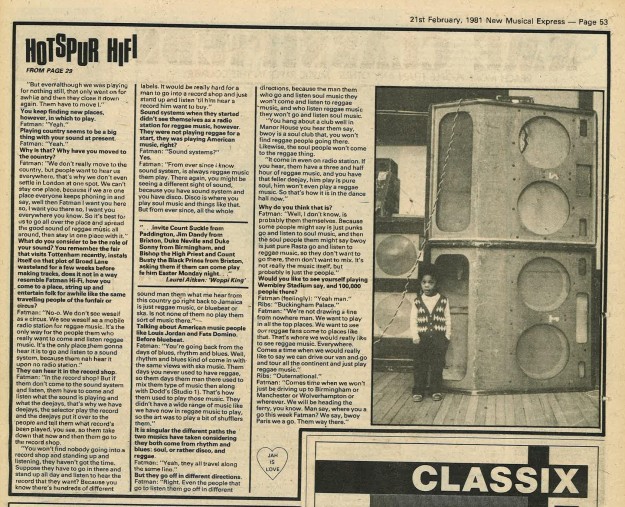 Kevin Rowland’s punk band reviewed live, along with the awesome Adverts, in the NME, 6 May, 1978.

There was something faintly ingigestible about the prospect of Nico being sandwiched between two generous slices of New Wave.
And there was something more than obvious about the sense of anti-climax at the end.
First onto the boards was that hardy and long-suffering troop, The Killjoys, and without much success.
What respect I had for them last year has been whittled away by their refusal to get any better. They seem to be making a positive stand against expertise.
It’s not their material that’s atfault. Most of their numbers, especially the revivalist rock’n’roll, are quite entertaining, but they demand fairly handling. And this The Killjoys fail to supply.
The result, more often than not, is that the songs get mutilated by chaotic guitar work and excruciating harmony vocals.
Their drippy French ballad number, their total lack of drive, and the assumed moronics of the lead guitarist, are all mammoth roadblocks on the highway to stardom.
Exit Killjoys, amid sporadic applause, and enter Nico.
The excellence of her music was counteracted, sadly, by her complete misjudgement of the situation.
Playing a drone medieveal-type accompaniment on harmonium, she sang settings of poems dedicated to the likes of Warhol and Nixon, in sonorous, Germanic tones.
The was not popular among hard-core Adverts supporters.
Had she ended with “Deutshland Uber Alles”, and not kept going, we would have been spared the spectacle of a bunch of barbaric jerks driving her off stage by lobbing beer mugs.
And so, eventually, to The Adverts.
The first thing that’s obvious about this lot is that they couldn’t survive for a second without a frontman as captivating and exciting as T.V. Smith.
His tireless gymnastics, and his penchant for hopping on top of the monitors, distracts attention from the rest of the band.
New drummer Rod Latter, and that hunk of pulchritude, Gaye Advert, laid down a neat, but unadvnturous, backing, but they don’t approach anything like the sonic barrage of, for example, The Jam.
“New Church” and “Bored Teenagers” were outstandingly good.
Others, such as “Drowning Men”, “Bombsite Boy”, and “On The Roof”, bordered on becoming a tuneless rumble, with T.V. struggling against slightly sagging rhythm.
The lack of audience reaction wasn’t entirly their fault. Apart from the curious mismatch of billing, by the time they actually got on stage, the average punter looked near enough comatozed anyway.
The set was inconsistent, like the whole evening, with moments of brilliance shining through. But I’d rather see The Adverts playing a small venue under less strained conditions. 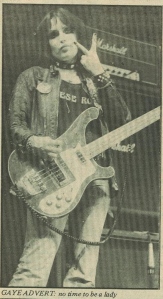 Dystopian sci-fi author, JG Ballard interviewed in the NME, 22 October, 1983. He was an influence on bands as diverse as Joy Division, the Buggles and Madonna, including Grace Jones. High Rise is a personal favourite of mine.
When they were children he was interned along with Peter Wyngarde by the Japanese during the war. 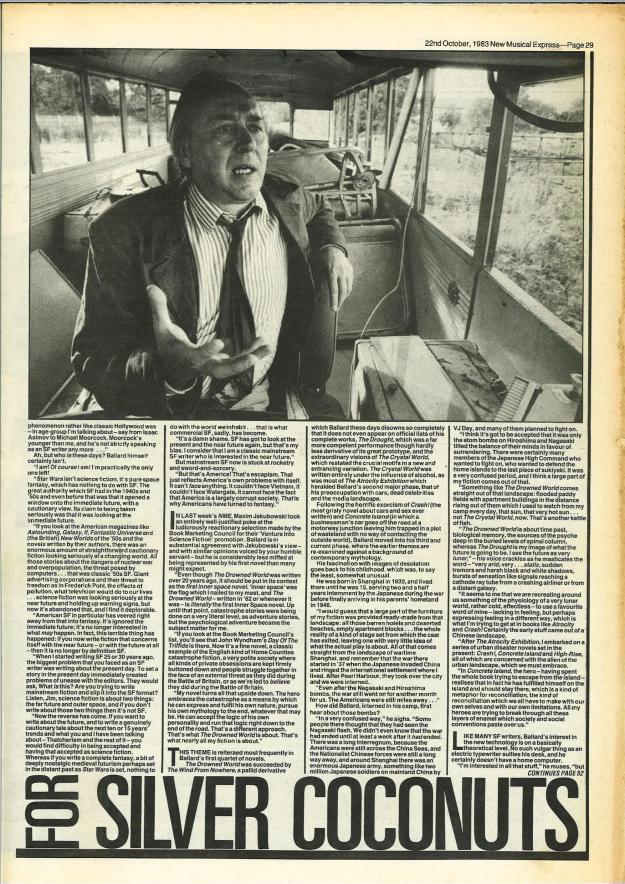 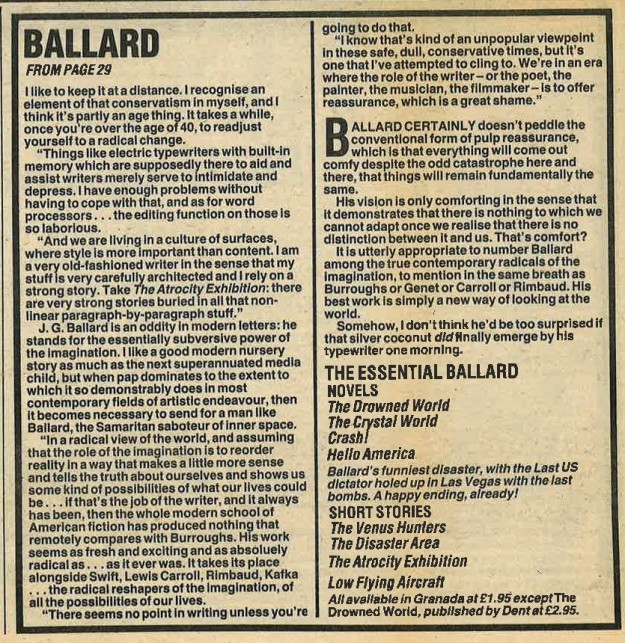 The Hackney Empire’s opening night with Roland Muldoon at the helm in 1986.
Some good poets on the bill.

French poet Jean Genet writes about his support for the Black Panthers in Black Dwarf, Volume 14, Number 33, 10 May 1970.

Powerful punk band Penetration get a feature in the NME, 11 November, 1978. Danger signs! 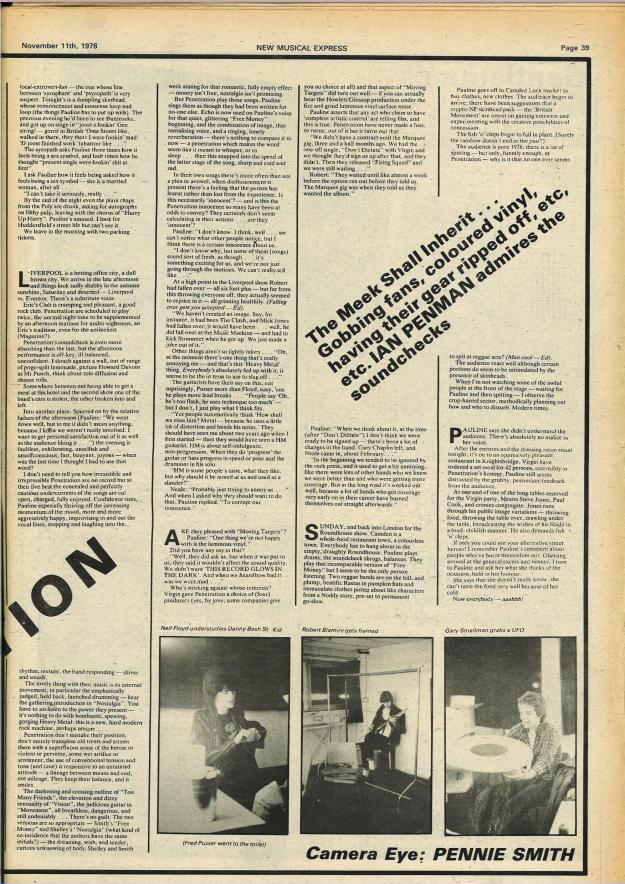 The anarcho-punk carnival plunders on, avoiding the twin pits of bankruptcy and ‘more committed than thou’ attitudes while evolving its cheap and accesible ethos. Tonight’s camp is in aid of the Animal Liberation Front, with the hard core out in force to see the newer bands and wave the flag.
Onstage the tattered and mohicaned frontman chides his equally well-dressed audiences as Look Mummy Clowns launch into yet another vibrant melody. Sparks of powerful musical inspiration shower the excited crowd as unremitting fanzine peddlers vie for your attention.
“I don’t wanna be today’s Miss World,” comes the cry from Hagar The Womb’s twin female vocalists, leaving blustering leaflets discarded in the anticipation of their brash feminist brand of kitsch’n’cliche. Formerly in the vanguard of the Can’t Play Won’t Care brigade, their appealing fallabout optimism has survived the metamporphosis into sprightly, early Slits type melodies, and the crowd dances its approval.
They are bright and light-heartedly serious, grasping the whole unashamed spirit which stops these affairs being merely alternative party political broadcasts.
As they finish and the site is cleared, everything seems somehow happier.