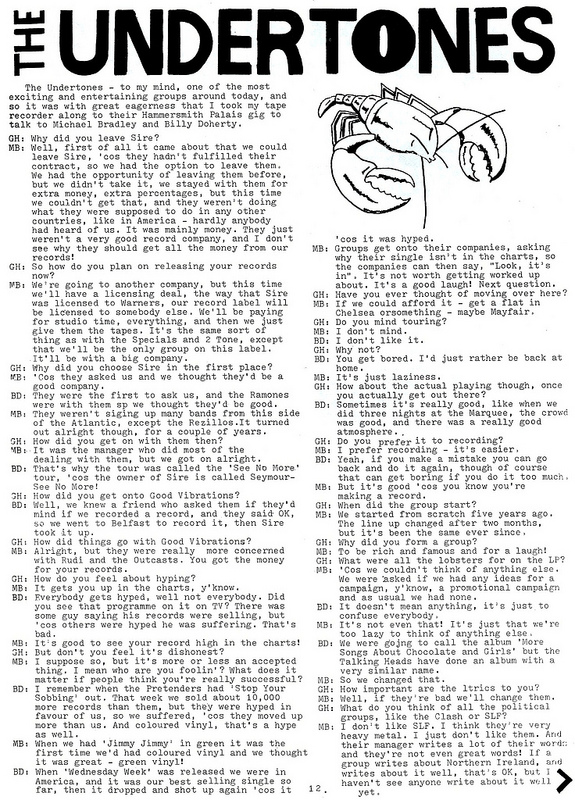 2003 BBC documentary, The Revolution Will Not Be Televised, by Don Letts.

8 songs and interview from the whippersnappin’ Linda Lindas. Los Angeles Public Library was celebrating Asian Pacific Islander Heritage Month in May, 2021.
Actress Rosa Diaz says, “I’ve had the Linda Linda’s in my life for about a day, and if anything happens to them I’ll murder everyone in this room.”

News from Boston newspaper The Rebel a monthly journal of anarchist communism, Vol 1 No. 3, November, 1895.

Although rain fell in sheets the evening of November 17, the meeting held at Caledonian Hall in commemoration of the death of the Chicago martyrs was a successful one, nearly every seat being taken.
The program opened with a violin solo expertly rendered. Comrade Geo. Miller, chairman, after a few appropriate introductory remarks announced the first speaker, H. M. Kelly, who dealt with “the Crime and its consequences.” Comrade J. Hughes then sang simply and touchingly the beautiful old song Annie Laurie, now known the world over as Parsons last song. Voltairine De Cleyre followed with an address that deeply impressed the audience, after which those assembled were invited to join in singing Nesbitt’s “Hope of the ages.” Additional speeches were then made by Samuel P. Putnam, Prs’t of the American Secular Union, who said that the Chicago men were martyrs to human liberty. Messrs. Curtis and Morton, the former a socialist and the latter a nationalist, who while not agreeing with the anarchist doctrines strongly affirmed the right of free speech for which Parsons, Fisher, Engel, Lingg, and Spies were done to death. Thus the years do justice to the dead, and the hour approaches when their names will be coupled with John Brown’s in speech and song, nation-wide, world-wide.

Bodysnatchers and the Selecter reviewed live in the NME, 12 January, 1980.

The Selecter
The Bodysnatchers
Dingwalls

The last thing I heard in 1979 and the first thing I heard in 1980 were rocksteady ska rhythms from two bands connected with what must be the year’s most successful independent label – Two Tone.
As the dancing reggae beat of The Bodysnatchers saw out the ’70s, a cross-section of Two-Tones – The Specials, Madness and The Selecter, purveyors of this newbeat style – mingled with the punters and pressed enthusiastically against the stage. A few minutes into the New Year and a good half of that brigade (The Selecter) were on stage themselves, showing the way into 1980, and showing their precursors, The Bodysnatchers, the way too…
…Because unfortunately, The Bodysnatchers, although heading in the right direction, have not yet found a route of their own. They are following too closely in the footsteps of the Big Three, without introducing any new ideas, and so allowing the Two-Tone stamp to hide their personal identity.
But there is plenty of room for development within the seven-piece (which includes keyboards and saxophone) all-girl line-up – none of them has been playing for long and all are learning together. But at the moment, with most of their concentration put into finding their way up and down fretboards and keeping in time, there is not much left for experimentation or diversification.
Their music is nearer reggae than ska – even more so than The Selecter – but with singer Rhoda’s constant calling for Rude Girls (and boys) and the band’s two-tonic dress, their affiliations are obvious. They get into the spirit of things, are lively and vigorous – but not distinct enough. Because they have come so far after only three months together, suggests that the scope and capabilities are there.
As Two-Tone’s next likely proteges they’ll get all the help and encouragement they need, the only danger being that they may become even more restricted in their musical direction. (The reason Madness broke from Two-Tone was their awareness of the need to branch out on their own, and The Beat have voiced the same opinion).
Despite these reservations, The Bodysnatchers are definitely one of the bands to watch out for in 1980; as are, of course, The Selecter.
They played better than ever this evening, or at least were more enjoyable back in a small venue. Pauline seems to click with any audience the moment she walks on stage, but tonight there was an added familiarity. With her quick, joyful running, dancing and Cockney stage-talk it was impossible for the punters not to be filled with the same zest for The Selecter’s ska’d reggae, spiked tonight with a highly addictive New Year spirit.
‘James Bond’, ‘Carry Go Bring Home’ and ‘On My Radio’ were obvious favourites and the most ecstatically received. A colourful mixture of people surged towards the music, leaping and reeling at random, drunk on atmosphere as much as alcohol, and The Selecter reciprocated with all their usual unrehearsed capriciousness, dashing about and knocking each other over in their enthusiasm, whilst never missing a note.
Motorheaders Lemmy and Phil (thy) Animal, and Shane Nip mingled with crew cuts, spiked barnets and dreadlocks – proving once again The Selecter’s massed and mixed audience appeal.
What better recommendation for the ’80s?

Top drawer chap Shappy was the barman at Bowery Poetry Club and kept me well supplied with PBR.

Seething Wells reviews Cock Sparrer, some punk, and some junk in the NME, 24 November, 1984.

Cock Sparrer are one of the few bands saddled with the kiss o’ death Oi! tag with more than two brain-cells to rub together and not particularly a stunning record, this. Never mind, I will love this band to liddle pieces forever just for the megafantas ‘The Sun Says’ which slays the nation’s fave arsewipe in 15 natty verses. ‘Tis a pity they have been unable to cobble together a few more ditties of the same magnitude.
Toxic Reasons have about the same grasp of the need for just a smattering of originality as the Sparrer boys and share the same whirlview (Mrs Thatcher is not a very nice person etc). The Toxic mob are American-type people and thus the hypocritical consensus of opinion that prevails in this paper deems them to be worth more than a sneer, a snigger and a casual toss into the waste basket. After two decades of half-choking on post-Kennedyian glop this writer struggles to disguise her righteous spite under the dubious banner of anti-cultural imperialism.
The ‘Daffodils’ thingy is the brainspawn of self-confessed individualist libertarian (hippy) Marcus ‘I’m-only-doing-it-for-the-kids’ Fetherby who uses the sleevenotes to moan on and on and on about how the whole world hates him and wants to blow his kneecaps off. Diddums. This egotistical meemeemee ranting is both boring and an insult to the bands that are to be found lurking in the cramped grooves – some of whom are quite good esp. No Control, Leitmotiv, Demob and the definitely sycadelik-or-wot Unjust, who contribute the track that is at present puncturing these pert and tortured eardrums with probably the best poonk rock recorded for ages but, alas, they happen to be… er… Americans… whoops!
In the great tradition of no-nonsense anti-pseud music for the kids on the streets is the incredibly down-to-earth Marillion. Like The Cure, The Banshees and Simple Minds these chaps haven’t got a pretentious bone in their bodies. They are able to relate to the snotty-nosed kids in acrylic anoraks wot ‘ang around on council estates studying for their CSEs in street credibility.

Poem from the first issue of American socialist magazine The Liberator, March, 1918 written by the editor, Max Eastman.

You bring the fire and terror of the wars
Of running infidels in shining hordes,
With spears like sun-rays, shields and wheeling swords
Flame shape, death shape and shaped like scimitars,
With crimson eagles and blue pennantry,
And teeth and armor flashing, and white eyes
Of battle horses, and the silver cries
Of trumpets unto storm and victory!

Who is this naked-footed lovely girl
Of summer meadows dancing on the grass?
So young and tenderly her footsteps pass,
So dreamy-limbed and lightly wild and warm,
The bugles murmur and the banners furl,
And they are lost and vanished like a storm!