Poem from the first issue of Blackburn zine Fight Back, 1984.

I lie down and I think of things
They revolve inside my head
I lie down and I cry a bit
But now I’m tired, I’ll go to bed
And as I sleep I dream a bit
Of being born and being dead
And slowly I remember
How my childhood started
I remember when I was two
Seeing pictures on the tube
Big Policemen and what they do
If you step outside the boundary line
Flames and fire, Police vans smoking
Petrol-bombs and people burning
Screams and shouts, people choking
I remember when I was two
Seeing these things on the tube
Then I grew up and understood
I began to differentiate
Some people bad others good
Oh! and I thought I understood
But that’s not so, it isn’t true
Big Policemen dressed in blue
You hound me and you beat me up
You shove me in your big blue truck
You drive me off without explanation
You curse me, drive me to damnation
You the Police Force of my nation
You my protector – you my satan
Things that shock, things that startle
But I’ve seen it all before
I lie in my cell my thoughts revolve
I go to sleep you lock the door.

Junior Murvin’s single reviewed in the NME, 12 April, 1980, and they’ve managed to find the one person in the world who doesn’t like it. Surprise, surprise; it’s Julie Burchill.

A sentimental world away from the Clash Battle Hymn of the People’s Republic cover; lovers rock practically, Joni-voiced Junior sounding like he should be singing “(I Check For) Police And Thieves”. I’m biased because I grew to loathe reggae via sitting through years of it waiting for punk bands to take the stage. They made a fuss about the violence – the endless reggae was much worse. If this version moved any slower it would get hauled in on suspicion.

Poem by Shmerke Kaczerginski recited and sung by Yelena Shmulenson. Shmerke was a poet and member of the United Partisan Organisation. April 19th marks the anniversary of the Warsaw Ghetto uprising in 1943.

Quirky 1965 film by Kenneth Hume, Larry Parnes has finger in it too, of choreographed mods and rockers, complete with a trendy vicar. Yes, that is Mick Fleetwood on drums.

At dawn I sighed to see my hairs fall;
At dusk I sighed to see my hairs fall.
For I dreaded the time when the last lock should go…
They are all gone and I do not mind at all!
I have done with that cumbrous washing and getting dry;
My tiresome comb for ever is laid aside.
Best of all, when the weather is hot and wet,
To have no top-knot weighing down on one’s head!
I put aside my dusty conical cap;
And loose my collar-fringe.
In a silver jar I have stored a cold stream;
On my bald pate I trickle a ladle-full.
Like one baptized with the Water of Buddha’s Law,
I sit and receive this cool, cleansing joy.
Now I know why the priest who seeks Repose
Frees his heart by first shaving his head.

If you’re a short haired type of person who likes dressing well, reggae, and zines you could do a lot worse than get yourself Packing A Punch, a Brief History of UK Skinhead Zines.
Kicking off with Skins, put out by the Last Resort shop in 1979, and running through to Spirit of 69, which started in 2014, the zines that are covered are the sussed ones, but there’s a real look at what was going on with skinhead from the late 70s up to today.
Zines are given a write up and as much as an issue by issue breakdown as can be found. Many of these zines disappeared beneath beds or were thrown out by mums years ago.
The author has been a skinhead a looong time and has been deeply involved with zines. As was I, and the lad knows what he’s talking about.
Of particular interest is the look at Hard As Nails, the 1983 zine that ‘sussed‘ skinheads coalesced around. This zine was the focal point for stylish dressing, reggae and soul, and a rejection of the travesty the gumbys had made of skinhead.
Also important were zines like Bovver Boot, Suedehead Times, and Spy Kids. It was great to catch up with 1993’s , Skinheads Don’t Fear, a top drawer zine that brought a sense of humour that so many other zines lacked.
Most of the zines ran for half a dozen issues or so, some a lot more, some less. It’s an insular world, but if it’s one you’re interested in this informative tome one you’ll find essential. It’s 120 pages and comes in at a tenner pls p&p.
Grab a copy from toasttu@aol.com

Morning sweeps into view, light punches
into my eyes, an underground train,
traversing crowds and escalators, gliding
upwards to face the rainswept streets,
pacing onwards in desperation, frost in the
air, traffic roaring past, clinging, congested
pavements, monolith corporation offices
pierce the sky … standing here alone in
perfect isolation, the hot tears scalding my
face … gazing all around, subways,
underground stations, the Post Office
Tower, mud, slush, thawing snow,
tumbling rain, and Oxford Street …
see those pretty girls in Oxford Street, all
dressed up with somewhere to go, speaking
volumes for my loneliness … those half-
opened doors and tentative glances, the
hands I grasped that slipped
away … buses and taxis in Oxford Street,
sophisticated window displays, ear-
catching music, video and hi-fi, fast food
chains, newspaper vendors, sex shops, and
January sales … drifting with the ebb and
flow of the crowd, I lose myself, my mind
disappears … but no, standing here on an
underground escalator amidst the
billboards selling newspapers and lingerie
I feel alive, the blood coursing in my veins,
aware of every new sensation, every last
drop of pain and desolation. 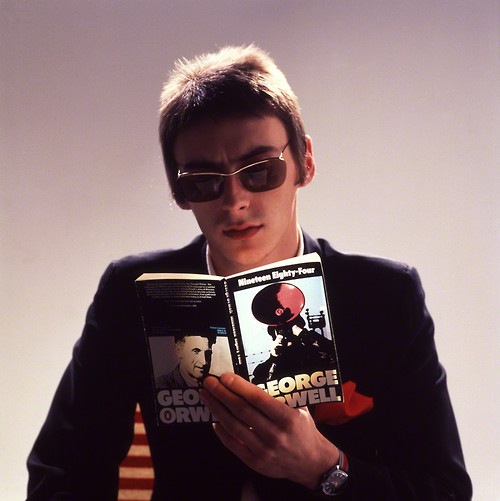 ZigZag, No. 82, March/April ’78 had a luridly headlined cover that led to a kick arse editorial from Caroline Coon.