From Oz, number 8, May 1970
This feature is from the notorious schoolkids issue of Oz, which led to prosecutions. The article is about guerrilla theatre in several London schools.
In the early 80s Ranting poets would often crash punk gigs by jumping on stage and machine-gunning poems over the mic’. Poets also did gigs on picket lines, as still happens. Working class poets thought that poetry could say something to ordinary people and that the audience and moment for a poem were important. Whilst most academic poetry was in an echo-chamber the only one the Ranters were interested in was on dub albums. 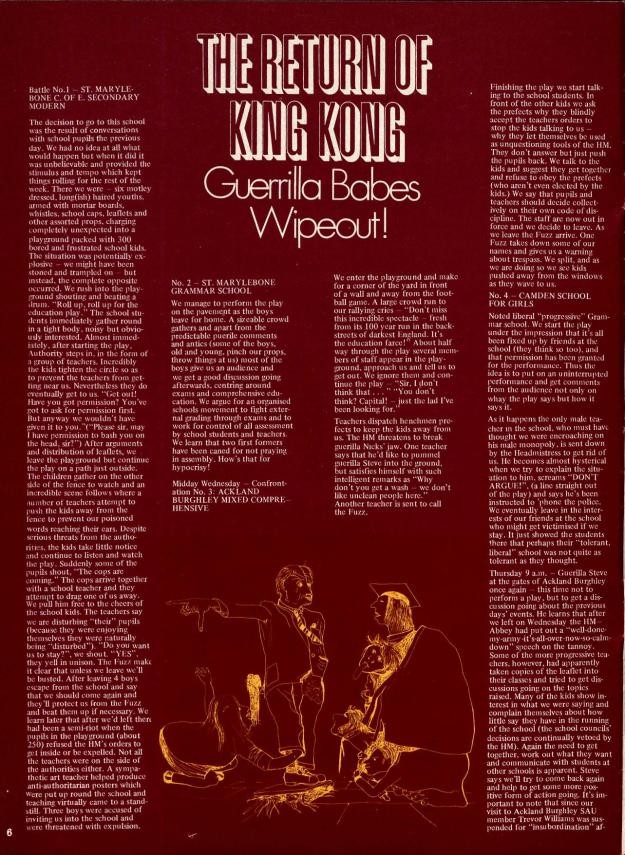 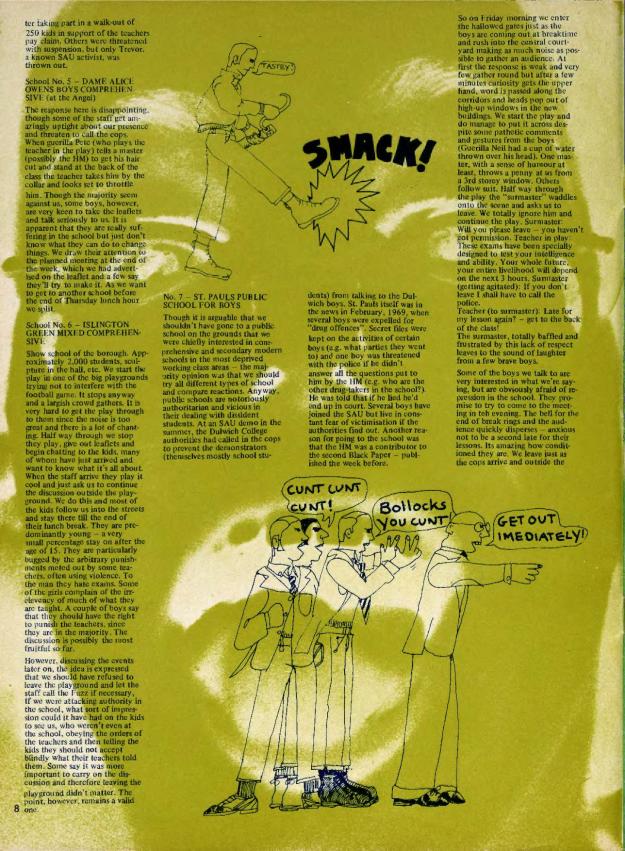 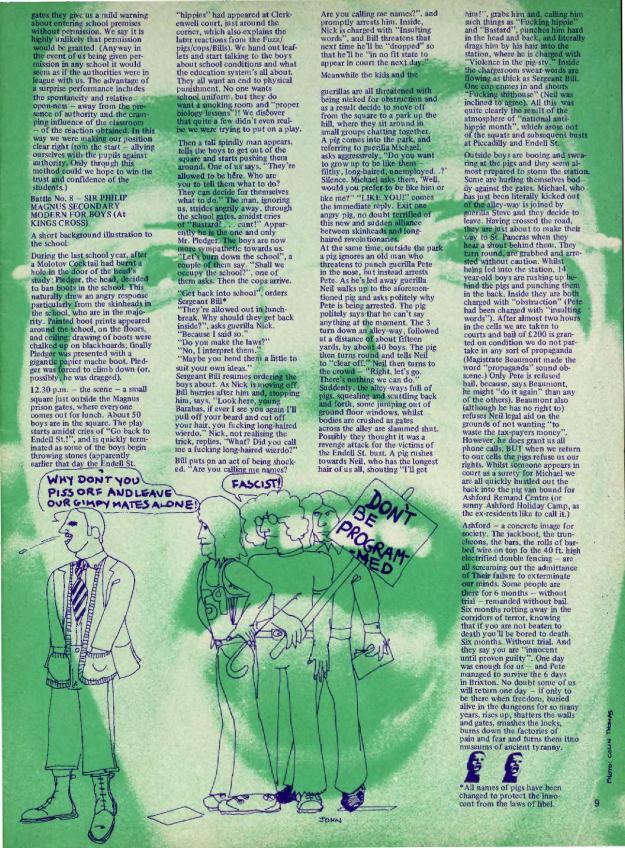 From Southend ‘zine Allied Propaganda, issue 3, 1980.
Killing Joke’s early singles and first album dripped with brooding menace. The gigs got pretty violent too.
Later on the band got quite mainstream but continued to be weird. 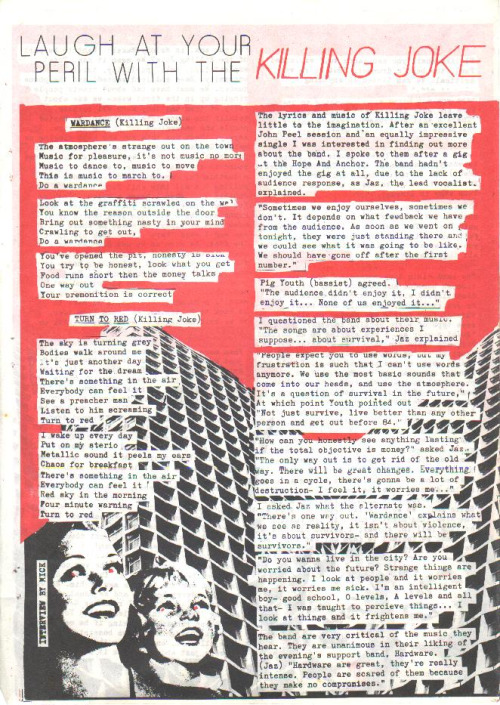 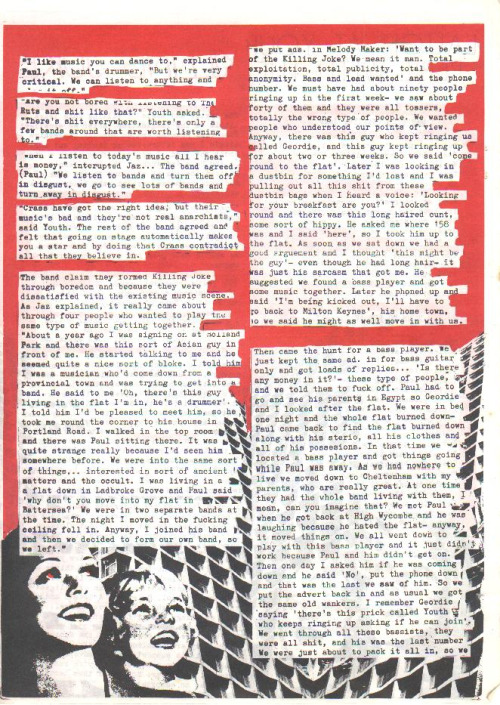 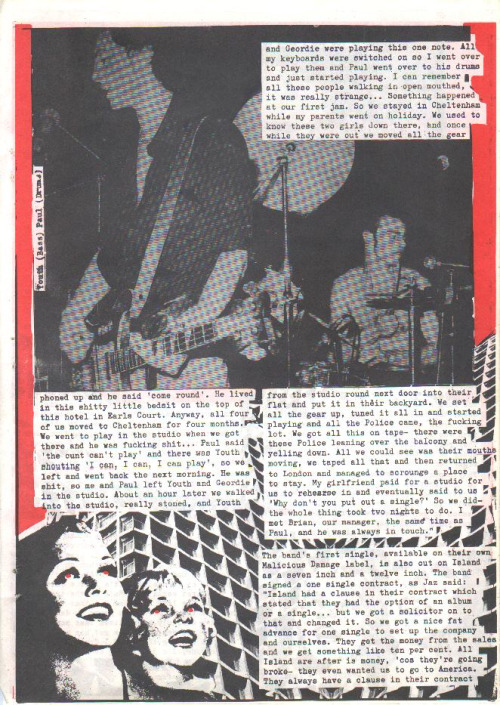 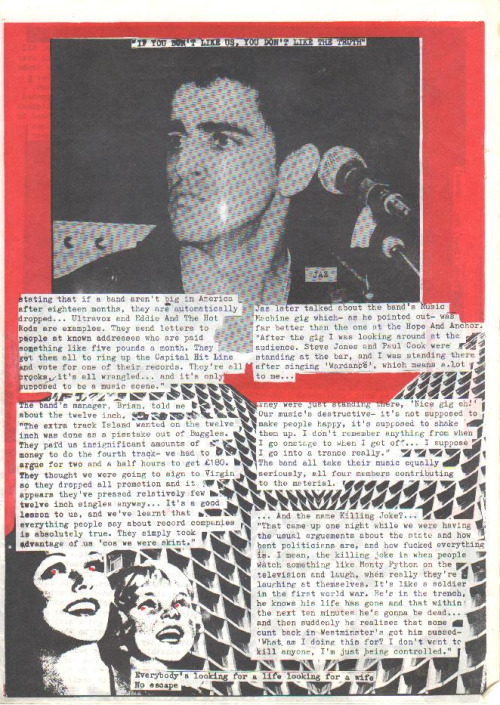 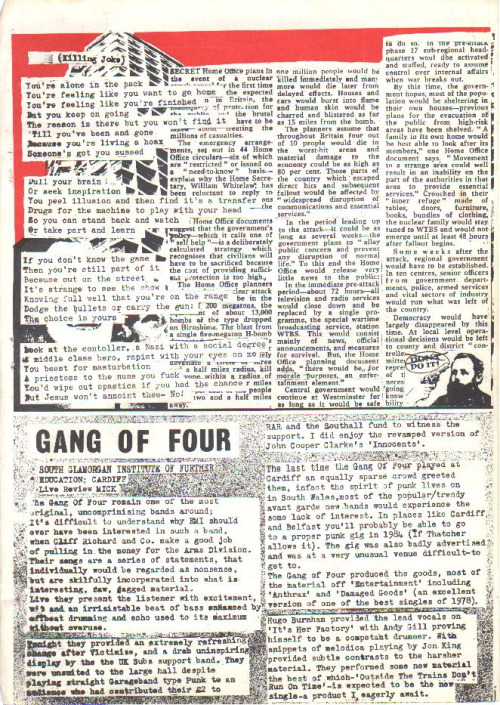 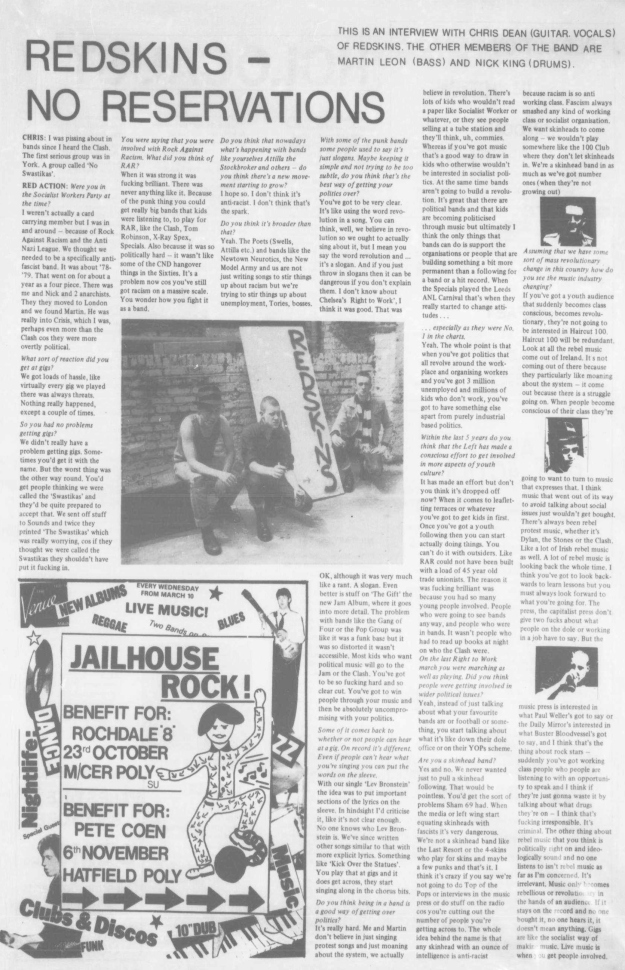 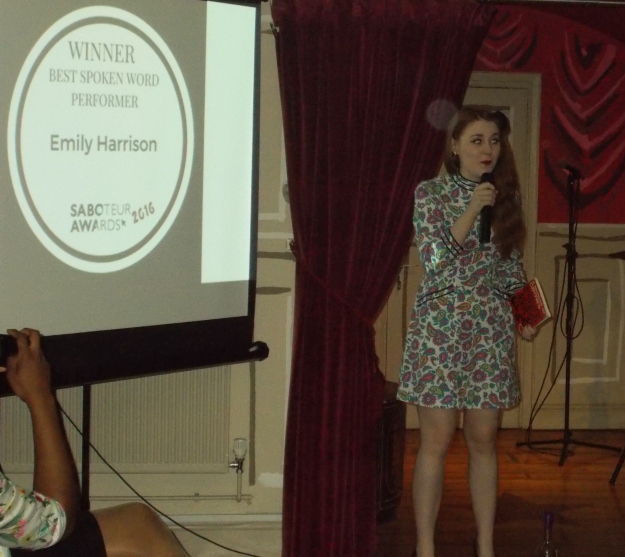 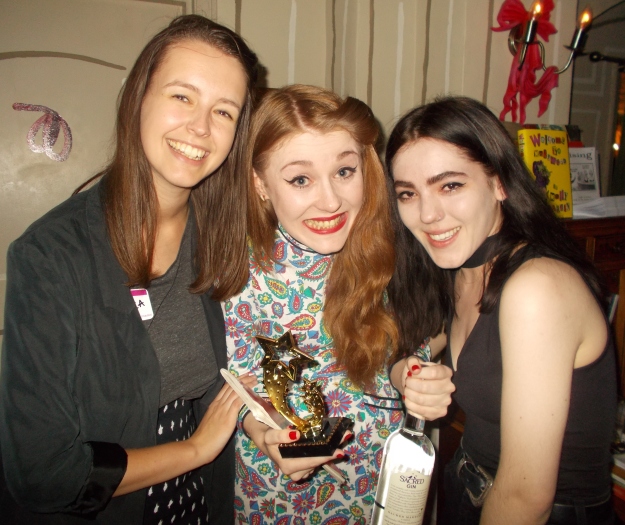 She’s gigged for us a lot and her work is full of honesty, spark and humour. Writing openly about mental health isn’t easy, and doing so without being mawkish or a victim is even harder, but Emily’s work has helped people talk about an issue that touches most of us in one way or another. Better yet, in an engaging way that underlines that we all have worth. She’s also been active in gigging in support of a number of good causes.
Stand Up and Spit would be worthless unless we link up what us older poets were writing, saying, and most importantly of all, doing in the 80s with the even grimmer political situation today, but on the plus side a much better spoken word scene. One where working class writers have an increasingly loud and powerful voice.
Congratulations Emily! 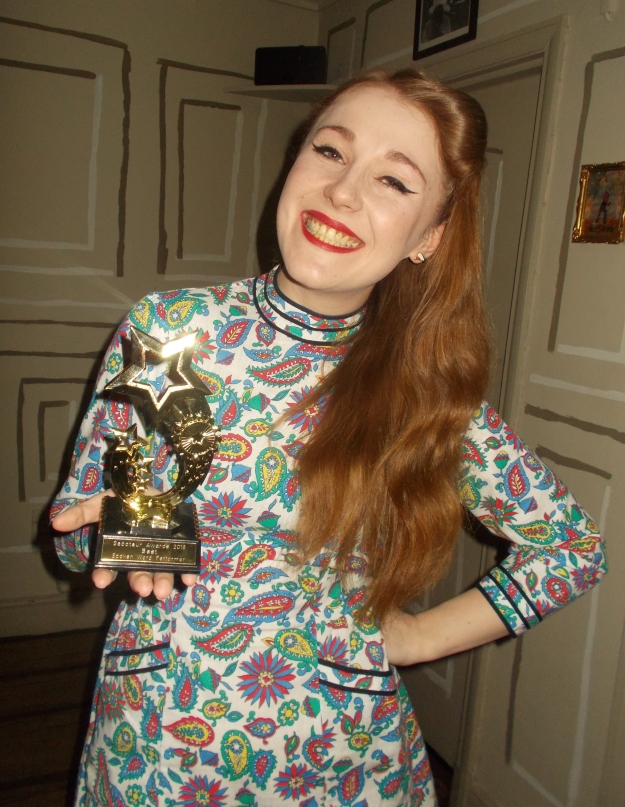 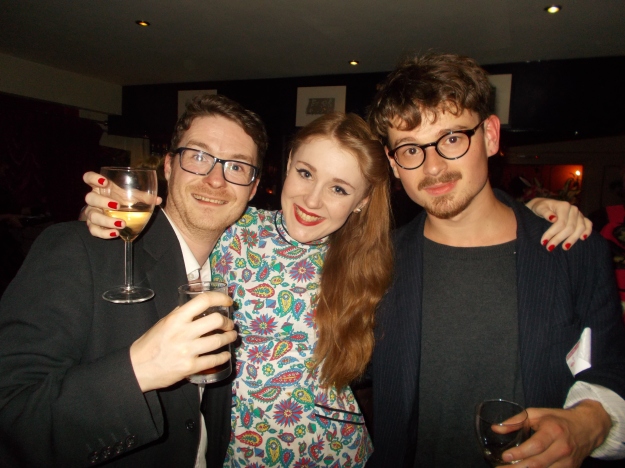 Big cheers for the win. 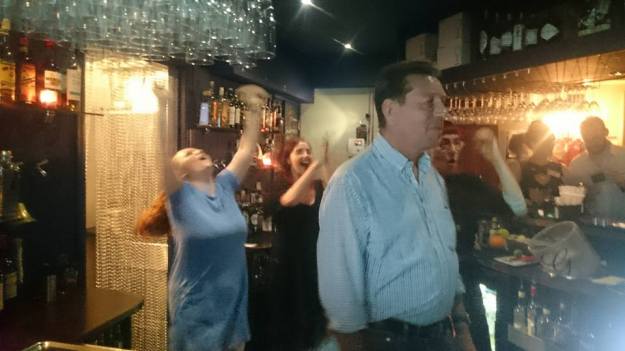 Obviously my look was fierce. 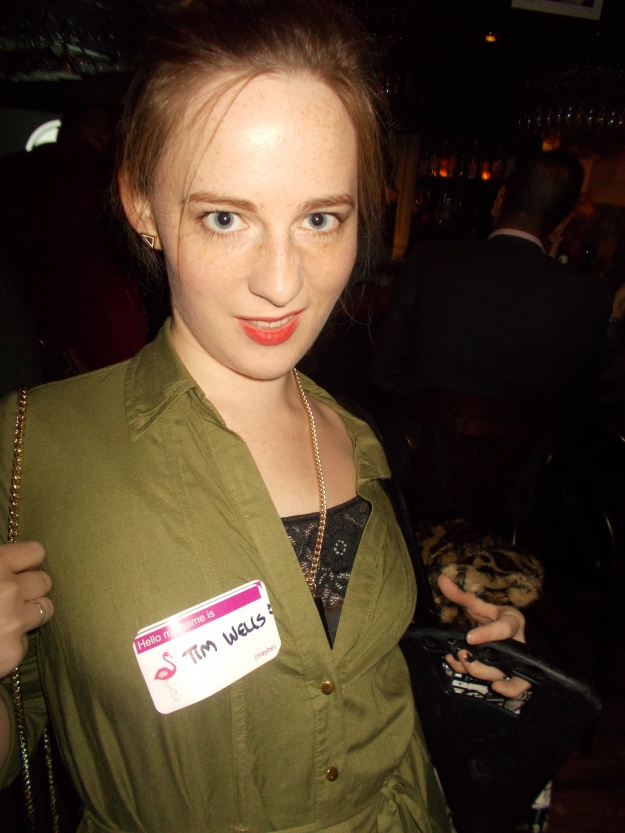 Jean Gittins is a poet of the miner’s strike. She wrote 5 short poems for a BBC2 documentary in December 1985.
She lived in Kippax and her husband was a miner and her two youngest sons worked at Ledston Luck Colliery. She was an active member of North Yorkshire Women Against Pit Closures and had a collection of poems Striking Stuff published by Bradford’s 1 in 12 Publications Collective in 1986 (ISBN 0 948994 00 2).
In the academic book Digging The Seam: People’s Cultures of the 1984/85 Miner’s Stike (2012) The academic Mike Sanders compares the Chartist mass strike of 1842 to the 84-85 miners’ strike and draws attention to one of the common characteristics of both events – the mass production of poetry. “Poetry and politics are linked,” he writes, “by their transformative potential”. 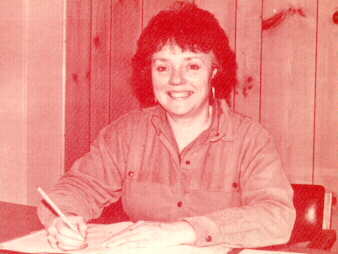 In 2009 the BBC were looking at the history of the miner’s strike 25 years on, and Jean told them: “I had written some poetry all my life but my family said ‘that won’t earn yer’. Publishing the booklet Kim appeared in was a fund-raising thing when the miners’ funds were sequestrated.
“I find that my poetry has to be inspired by something, I can’t just turn the tap on.
“It might seem odd to say but the strike was the best year of my life and very different to anything I could have expected. Who would have thought I’d be making a speech on the back of a tractor at Hyde Park with faces in the crowd stretching further back than I could see?
“Mine was a mining family including my two youngest sons who were miners. I’m not sure that, even now, some of the miners involved want reminding about the strike.
“People don’t know the severity of it all. If you weren’t involved why would you know? You don’t always know much before getting involved in something and people wouldn’t know what the strike entailed before it started.
“I learnt about other things during the strike that I hadn’t thought about before, like the Irish question, I didn’t know about the struggles in Ireland. Same with the Anti-apartheid struggles.
“I am 72 now, but I would go back, if I could, to 1984-5 that would do me.
“History wasn’t written by people like us and I think it should be.”

This poem is in both the documentary and the collection.

A beautiful hand with the pastry she had
Her sponge cakes were lovely and light
But, now it’s all muesli, and yoghurt, and nuts
While she’s out at meetings each night

We could have gone on, for the rest of our lives
Never knowing, just what she was like
And, she’d have been trapped in our image of her
If it hadn’t have been for the strike.

Katy Shaw says of the poem: “Here, home-life and working-class culture are put in direct competition with an active, participatory social life and new ‘trendy’ health foods; a process of transition which the poem seems to suggest was not borne out of, but speeded up by, the strike. This conflict undoubtedly shaped the lives of the women who lived through it.”
In her 2012 book, Mining the Meaning, Katy Shaw, an expert on miners’ poetry, has examined an archive of 1984 strikers’ poetry that ranges from poems published in anthologies and national newspapers to works published in small presses, as well as many poems scribbled at the back of cereal boxes and beer mats. Shaw says that the strike disempowered workers economically but empowered them linguistically: miners, with the help of benevolent publishers, wrote to raise funds, for instance for the Miners’ Victimization Fund, but mostly to strike a balance against many misconceptions conveyed by the media, which forced them to take a deep look at their action as a collective force, but also as individuals who were finding their own way of making history. 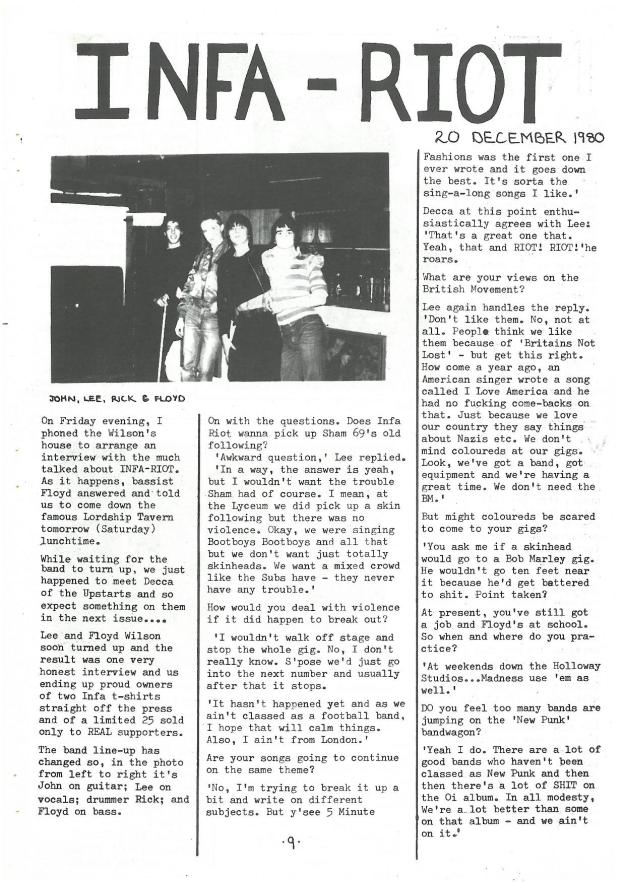 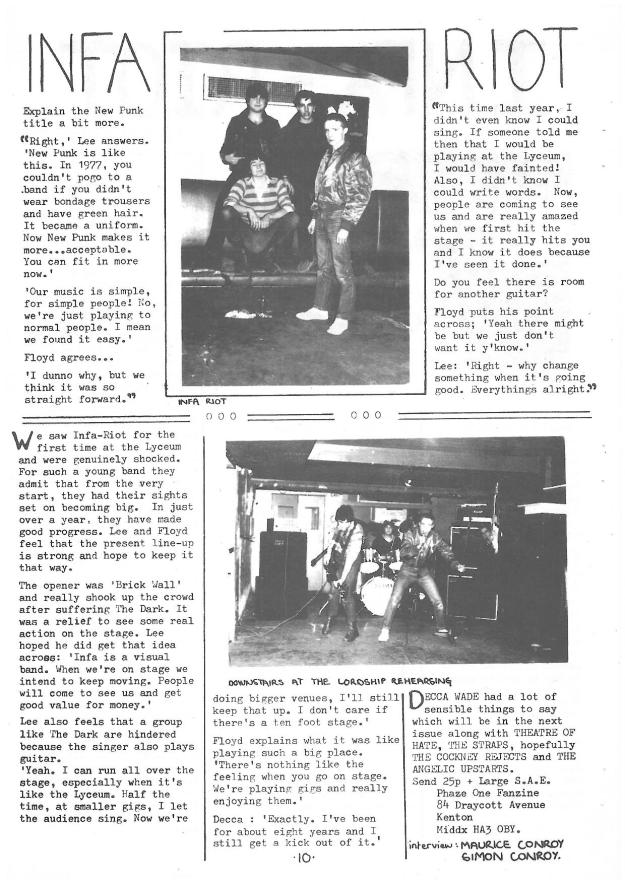 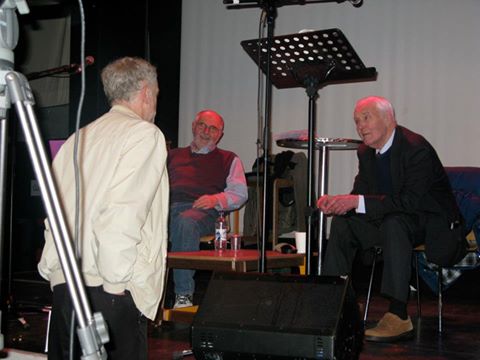 The Matchwomen’s Festival is always a good day out that looks at working class history in the East End, with a particular focus on the women that were fighting. It celebrates the match women’s strike of 1888. This years festival is on 2nd July, you can see the bill and grab a ticket here.

The match women’s strike has also made it’s way on to the stage as more recently the Ford Dagenham strike of 1968 has with Made In Dagenham and the Miner’s Strike has been on the silver screen with Pride.
This write up of a musical based on the strike is from Stage And Screen, September, 1966. 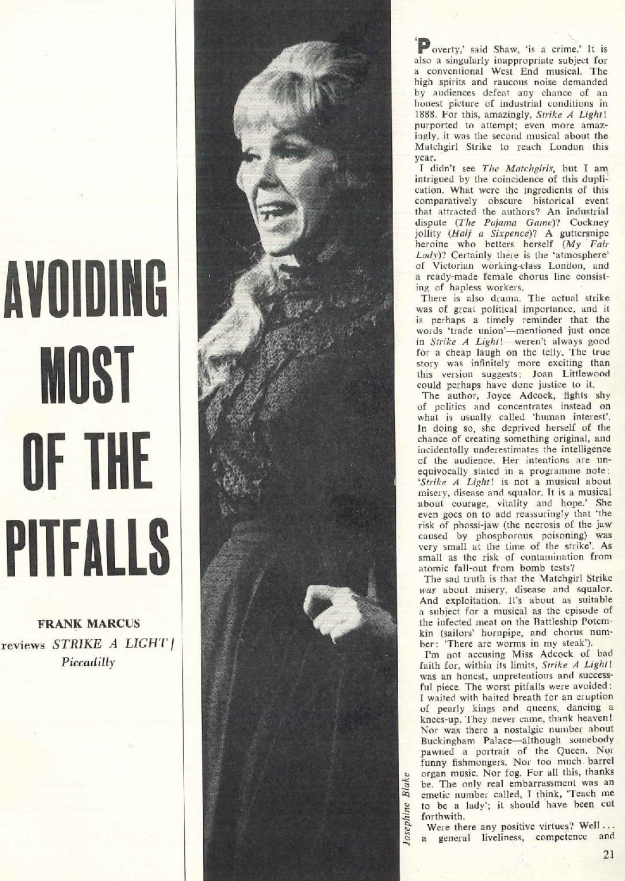 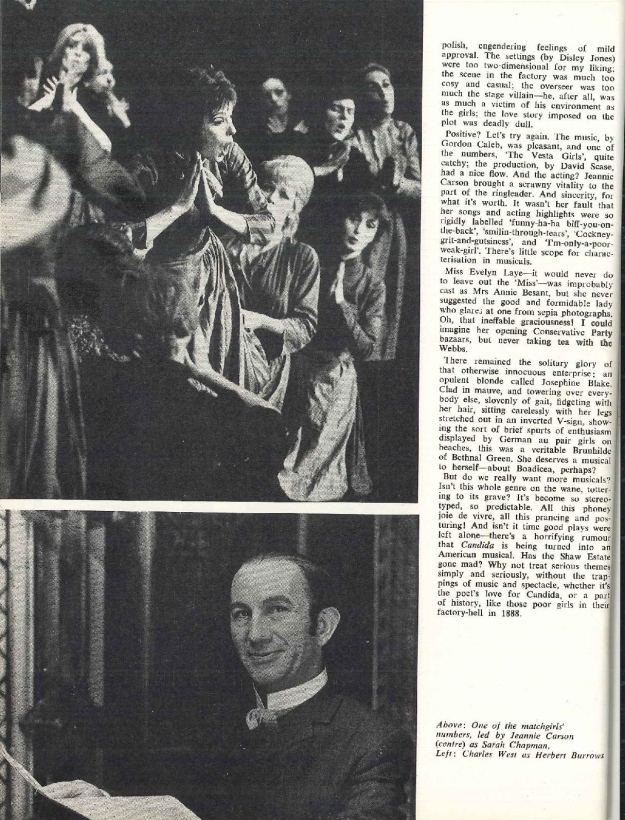 On Saturday July 9th we’ve a do at the Roundhouse in Camden Town. We kick off at 1pm with a discussion on What Did Punk Ever Do For Us?
There’s a lot of mythology that comes with punk these days and we’ve former Buzzcocks manager Richard Boon (and my local librarian); London reggae legend Dennis Bovell; Rhoda Dakar, from female 2 Tone band The Bodysnatchers; prototype New York punk Danny Fields; and the man behind Stand Up and Spit, poet Tim Wells to talk about safety pins, Ramones t-shirts, Rock Against Racism and the like. Did punk kick in the doors or did it open ’em to Boris Johnson? The discussion will be chaired by Prof. Matthew Worley. In true punk style, audience interaction is very much encouraged. 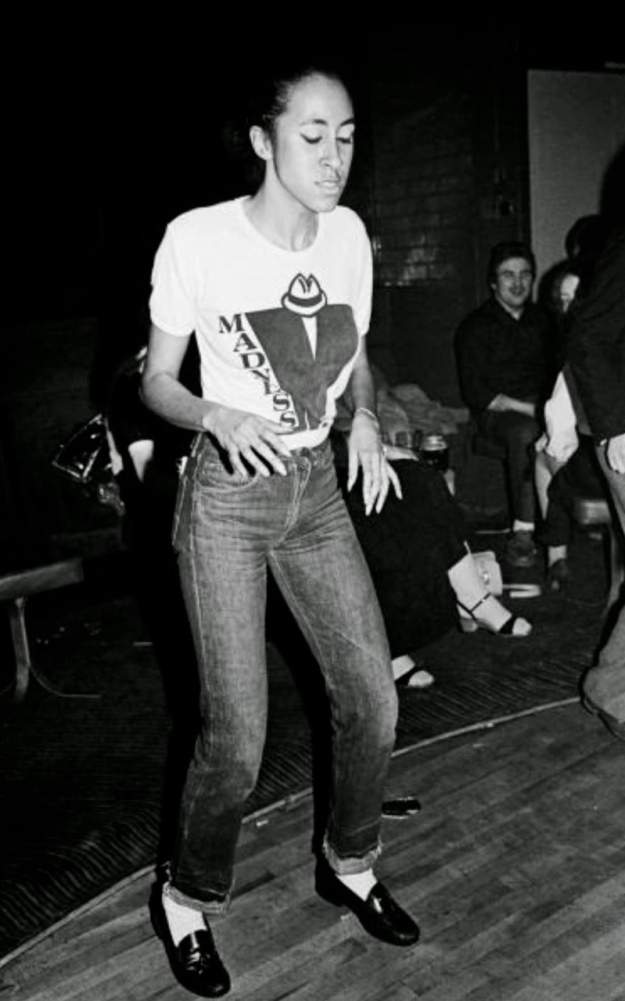 After that we get into gigging proper with Linton Kwesi Johnson, Porky the Poet, Garry Johnson and Tim Wells, and a new breed of brilliant poets who have been inspired by Ranting and fully embrace it’s angry, sweary, boozy nature, including Sophie Cameron, Salena Godden, Kate Fox, and Words First’s Joseph Beaumont-Howell and Liam McCormick. 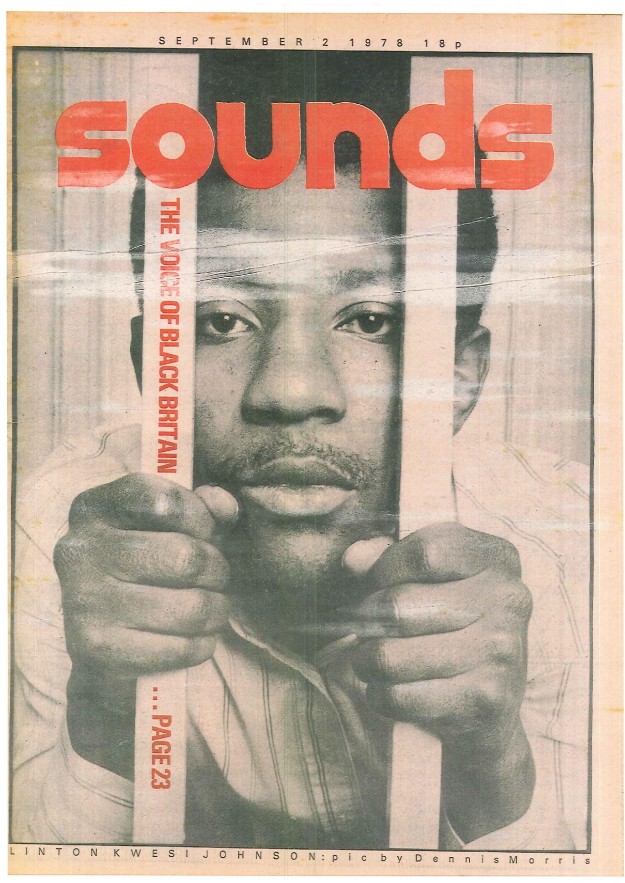 Protesting, political, working-class, humorous yet also deadly serious, Ranting poetry of the 80s was allied to the music scene, growing up alongside punk and reggae, and was the vibrant precursor of today’s spoken word. Stand Up and Spit celebrates this Ranting ethos that is still very much alive and spitting today.

The event will be finished off with a punk-singalong led by Thee Jezebels frontwoman the mighty Laura Anderson. 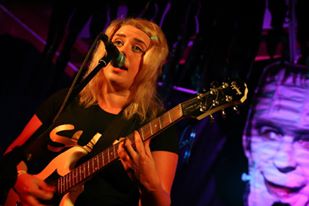 This poem is by Siggy Moos and comes from the 1983 Hackney Writers’ Workshop anthology Where There’s Smoke published by Centreprise, the community bookshop that used to be in Dalston, it’s where Hackney Pirates is now.
Robin Simpson who was involved with Centreprise remembers, “We were told in 1970 that a bookshop would never work in the East End because East Enders didn’t read.”
Ken Worpole was published in the antholgy and says: “It was a heady time and there were lots of books about alternative culture and ideas, lots of interest in music and politics. It was very much part of what was happening in Hackney at the time in terms of the borough’s very lively counter-cultural scene.”

On The Death Of Blair Peach

And the earth span
And the earth stared
And the angry clouds
Spat their contempt
Into the face
Of this mean, murderous planet
Which feeds its innocent soil
With the young bodies
Of the selfless best
Now hung or stabbed or shot
Now driven to destroy themselves
Now battered in the streets 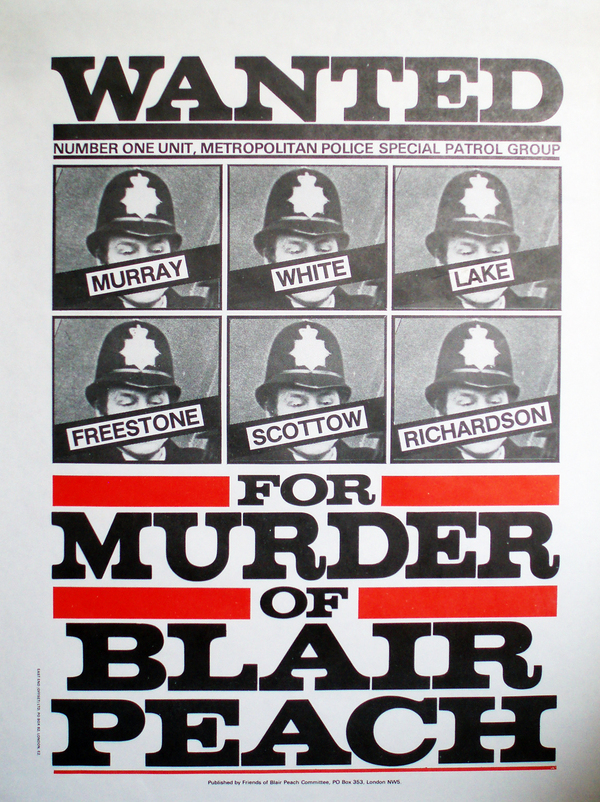